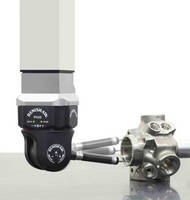 Renishaw's new PH20 probe head increases touch-trigger CMM inspection throughput up to three times using fast, infinite, rotary positioning and unique "head touch" capability for high-speed point capture with minimal CMM movement. Designed for use with the industry-standard TP20 touch-trigger probe, the new PH20 head brings 5-axis inspection capability to smaller CMMs for the first time by optimizing the working volume of the measurement platform. The PH20 is available for new CMMs, as well as retrofit machines using shank or quill mounting. It can use most existing inspection programs for indexing heads without modification, and requires no compressed air.

"REVO 5-axis scanning measurement set the benchmark for performance on larger CMMs, but the PH20 is equally significant because it makes 5-axis inspection practical and accessible for almost all CMMS," said Denis Zayia, Renishaw National Sales Manager. "Unlike conventional touch-trigger measurement which relies on speeding up the movement of the CMM's 3 axes to measure quickly, PH20 uses head motion to minimize CMM movement - and the associated dynamic errors - at higher measurement speeds. It also enhances inspection efficiency with adaptive positioning to accommodate part misalignment and provide optimal feature access."

PH20 incorporates the TP20 touch-trigger probe, affording access to a range of proven probe modules and wide selection of trigger forces, directional sensing options and extensions to meet application requirements. Current users of TP20 systems can upgrade to the PH20 and utilize all existing modules, with the exception of the extended-force module.

The PH20 system uses a Renishaw UCC controller, which provides connection to existing metrology and application software through the established I++ protocol. As a retrofit package, the PH20 comes with the controller and Renishaw's MODUS(TM) metrology software for a fully integrated solution.

Inquiries should be directed to: