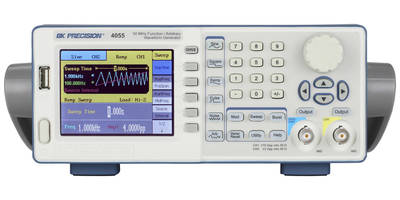 B&K Precision today announced the launch of its 4050B Series dual-channel function/arbitrary waveform generators, and replaces its former models 4053, 4054, and 4055 with enhanced specs and functions. The new design improves every aspect of the instrument, offering better square wave performance and many other features at no additional cost. The 4050B Series can generate waveforms up to 60 MHz for use in education and other applications requiring stable and precise sine, square, triangle, and pulse waveforms, modulation and arbitrary waveform capabilities.

Notable improvements include increases in both sine and square frequency ranges to 30 MHz and 60 MHz for models 4054B and 4055B, respectively. The upgrade allows each model to generate square waves with faster rise times and low jitter. Additionally, the secondary output now provides the same output voltage range as the main output. New channel tracking and combine functions have been added to let users take advantage of the instrument's true dual-channel functionality for their applications. Each channel can be varied from 0 to 10 Vpp into 50 ohms and is fully independent with individual output On/Off buttons.

The front panel UI has been enhanced with a large 4.3" color LCD display along with dedicated channel selection keys and output buttons to make waveform adjustments quick and effortless. The USB host port on the front panel can be used to save and recall instrument settings and waveforms to a flash drive.

Equipped with a high performance 14-bit, 150 MSa/s, 16k-point arbitrary waveform generator, the 4050B Series provides users even greater value with up to 196 built-in arbitrary waveforms and the ability to create and load more than 1,000 custom 16-kpt waveforms using the included waveform editing software. A new harmonics function also enables the instrument to generate harmonics up to the 10th order with independent amplitude and phase settings.

On the rear, the 4050B Series adds a LAN interface next to the standard USB interface, counter input, and sync/modulation/trigger auxiliary I/O. Furthermore, the instrument is now capable of generating a 10 MHz reference clock output in addition to the external 10 MHz input of the previous series. For GPIB connectivity, an optional USB-to-GPIB adapter is available.

On the rear, the 4050B Series adds a LAN interface next to the standard USB interface, counter input, and sync/modulation/trigger auxiliary I/O. Furthermore, the instrument is now capable of generating a 10 MHz reference clock output and retains to the external 10 MHz input of the previous series. For GPIB connectivity, an optional USB-to-GPIB adapter is available.

Available immediately, B&K Precision's 4050B Series products are all backed by a standard 3-year warranty and listed at the following prices:

For more than 60 years, B&K Precision Corporation has been building a reputation for excellence in the design and manufacture of reliable and cost-effective test and measurement instruments. The company's products are used in a wide range of applications including design, research and development, production line testing, industrial maintenance, and electronic field service. B&K Precision test and measurement instruments are standard equipment in a large number of universities and technical schools which train future engineers and technicians. B&K Precision was founded in 1951 and is headquartered in Yorba Linda, California.