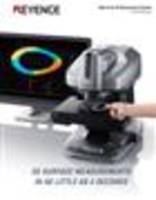 With VR-3000 Series, users can instantly and accurately measure rough surfaces, flatness, warpness, and planarity. System can perform batch analyses between multiple samples simultaneously under same condition. Users can compare visual and numerical differences between design data and actual sample, then export scan back into CAD data. In addition, VR-3000 can automatically determine if part is good or bad based on user-defined tolerances.

KEYENCE CORPORATION, a world leader in microscopes and measurement instruments, has released a new model of its VR-3000 Series.

VR-3000 Summary
The new VR-3000 Series allows an instant, non-contact 3D scan of a wide area, which has been difficult to achieve with conventional methods. The new model can easily measure rough surfaces, flatness, warpness, and planarity. Anyone can measure instantly and accurately; just place the sample on the stage and click a button.

Compare with CAD data and quantify surface shape differences.
The VR-3000 Series can compare measurement results directly to CAD data. You can compare visual and numerical differences between design data and an actual sample, then export the scan back into CAD data.

Pass/Fail inspection.
The VR-3000 Series can automatically determine if a part is good or bad based on user-defined tolerances.