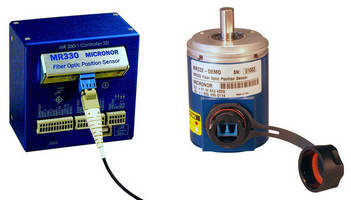 The MR330 series position sensor is an innovative all-optical design immune to any electro-magnetic interference such as lightening, radiation, magnetic fields and other harsh environmental conditions. The fiber optic aspect of the sensor also makes it perfectly suited for long distance position sensing over hundreds of meters without being affected by ground loop problems.  The system outperforms resolvers and conventional electronics-based encoders by providing inherently safe operation and interference-free sensor transmission over distances exceeding 300 meters.

The sensor  uses a novel optical technique embedded in a passive sensor and active controller connected by a duplex fiber optic link. The controller transmits a burst of light to the code disk in the sensor which accurately modulates the spectral components of the light based on angular position. The position information is imprinted in the optical spectrum of the light and guided back to the controller for a precise position readout. The sensor requires no electrical power and houses no electronic components whatsoever.

Since 1968, Micronor has been a leading global supplier of automation and motion control products for industrial applications as well as military, aerospace, medical and other harsh/hazardous environments. Products include fiber optic sensors, encoders, resolvers, rotary limit switches, motorized potentiometers, pulse generator, and custom engineered feedback and control units. Micronor has facilities in California-USA and Switzerland.