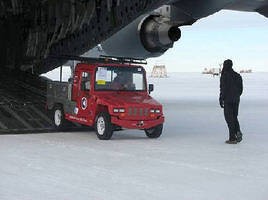 NREL is leading a project that will test two e-ride EXV2 electric vehicles at McMurdo Station. The goal is to reduce dependence on imported fuels in Antarctica and validate performance of vehicles in extreme conditions. If EVs can prove they can operate where temperatures dip below -50Â°F, then they will help offset current fossil fuel use and pollution at station. These more efficient and less resource intensive EVs could replace base's fleet of diesel trucks, snowmobiles, and buses.


The electric vehicles were staged at NREL before being transported to Antarctica. NREL is leading a project that will test two EVs at McMurdo Station. The goal is to reduce dependence on imported fuels in Antarctica and validate the performance of the vehicles in extreme conditions.

The punishment your car endures on a cold winter commute pales in comparison to the veritable torture that researchers at the U.S. Department of Energy's (DOE) National Renewable Energy Laboratory (NREL) are inflicting on two electric utility research vehicles - all in the name of science.

For these e-ride Industries EXV2s, commutes are short in distance but long on darkness and temperatures that dip below -50°F at the McMurdo Station in Antarctica. However, if these electric vehicles (EVs) can prove they are tough enough to take on Antarctica, then they will help offset current fossil fuel use and pollution at the station. These more efficient and less resource intensive EVs could replace the base's extensive fleet of diesel trucks, snowmobiles and buses.

"This project is specifically looking at reducing the amount of petroleum used down in Antarctica," NREL Senior Task Leader Ted Sears said. "Transporting vehicle fuel to Antarctica is costly and resource intensive, and requires great planning as well. Managing energy use very carefully is critical because of potentially harmful effects on the environment."

The Polar Regions are pristine research environments and the National Science Foundation's (NSF) Office of Polar Programs is working with NREL and DOE to incorporate more renewable energy and energy efficiency practices into its current facilities. In fact, NSF and Raytheon Polar Services own one of the vehicles and DOE/NREL own the other.

"Each gallon of fuel NREL can demonstrate can be displaced with renewable energy will make a real difference," Sears said. "At this point, it looks promising given that two renewable resources - solar and wind - are already on 'the ice' and can be used to power vehicles. So, we've put two test electric utility vehicles down there, to see how they function.

"Of course, we'll be examining the power needs of any proposed McMurdo Station electric vehicle fleet to ensure it would not negatively impact the other power needs and operations at McMurdo. It may be that a mix of vehicle types, electric and conventional, is appropriate, depending on the operational needs at the facility."

Getting There is Half the Battle

NREL Senior Task Leader Ted Sears puts the NREL logo on one of two electric vehicles that are now working in Antarctica. Sears is leading this project - which will implement testing of the EV's at McMurdo Station in Antarctica, to see how well EVs can hold up under harsh conditions.

"E-ride's EXV2 was chosen mainly because of its truck frame and its design as a utility vehicle," said NREL Senior Mechanical Engineer Ian Baring-Gould, who leads the Laboratory's work in polar environments.

Researchers thought these were the units that would best fit the kind of vehicle uses found in Antarctica where pickup trucks are currently the vehicle of choice. The e-ride EXV2 is designed as a two-person vehicle with a truck-like bed and larger utility style tires for use on dirt roads. It has a maximum speed of 25 mph under "normal" driving conditions and uses an array of lead-acid batteries. For deployment to Antarctica, the EVs were outfitted with insulation for the batteries as well as battery heaters.

NREL worked closely with NSF and Raytheon Polar Services during the selection and manufacturing process. But, the work really started once the EVs made it to NREL's campus in Golden, Colo.

"We did some initial testing at NREL using a cold cell and dropped the temp to -9°F while the EVs were on a dynamometer," Sears said. "We saw that the vehicles function as we expected, and were able to capture data during cold temps."

Once the EVs were outfitted with initial data logging equipment, NREL took the vehicles to Raytheon to make sure the data loggers could communicate wirelessly with the NSF and Raytheon servers and get information back to NREL. From there, it was off to California via flatbed truck. These EVs cannot be driven on the highway because their top speed is only 25 mph Once in sunny California, the EVs were put on a boat to Christchurch, New Zealand, and from there, a transport plane to McMurdo. The e-ride's plane landed on the ice in February 2011, on one of the last flights in before the harsh winter season hit.

"I love the photos from when the vehicles were unloaded in Antarctica," Sears said. "They just look to me like they are cringing as their tires hit the ice going, 'I don't know about this.' "

Working On 'The Ice'

After the long haul to Antarctica, the EVs are now getting used on a daily basis.

"They've been there for over a month now and are working, but we are heading into the bad weather now and we'll see how these vehicles do," Sears said. "Even if they are only good in the summer months, we would be happy with learning this and with the associated amount of petroleum savings."

In just over a month, the EVs have been driven more than 70 hours and logged nearly 140 miles. The data collection will continue for at least one year, capturing data during the most brutally cold months and the more "mild" summer months. The main concern as the Antarctic summer fades into winter is - how well will the batteries hold up?

"Empirical data on the capability of the vehicle batteries in such cold is critical," Sears said. "As a result, we are trying to learn everything we can about how the vehicle systems operate and respond in the extreme cold. Despite the vehicles being equipped with battery warming devices, there are still going to be limitations on their capabilities."

Not only in Antarctica but around the world, there are many remote locations looking at renewables to reduce fuel use. "That is one of the prime reasons we are testing this in McMurdo," Baring-Gould said. "In this case we are looking at EVs for McMurdo, but there is a huge market out there from rural communities in Alaska to islands in the Pacific that need to look at the transportation sector and how EVs can play a continuing role in their ability to reduce dependency on imported fuels."

In his recent State of the Union address, President Barack Obama called for putting one million EVs on the road by 2015. "These may not be the exact roads he was thinking of, but nonetheless, we are taking new technology and deploying it," Sears said. "This project really offers NREL a significant opportunity to increase the visibility of small electric vehicles, expand our experience with them, and validate the performance of the vehicles in extreme conditions."

Photo: The e-rides land on the ice in February 2011, on one of the last flights in before the harsh winter season hits. Testing these vehicles' batteries will be key to understanding how EVs perform in harsh climates.

Start Sourcing Suppliers Claim Your Company Profile
Thomas uses cookies to ensure that we give you the best experience on our website. By using this site, you agree to our Privacy Statement and our Terms of Use.