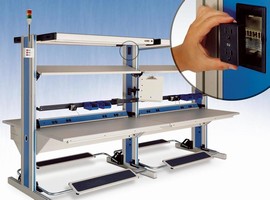 Dimension 4 workstations are available with optional Power Distribution System, which lets user swap duplex outlet modules on-the-fly to provide access to one of 3 separate 20 A circuits. Up to 6 separate duplex receptacle module locations are provided on single Dimension 4 upright. Users exchange numbered duplex receptacles to access separate power circuits. Modular workstations can be assembled as standalone unit or strung together to form any type of cellular work area required.


BREA, CA- Power requirements on industrial workbenches and workstations are often moving targets. As electrical equipment being used for different assembly and testing projects change, so do the power needs. IAC Industries provides a novel solution with their Power Distribution System (PDS). Provided as an option on the company's Dimension 4 workstations, the PDS allows users to swap duplex outlet modules to provide access to one of three separate 20 Amp circuits.

Up to six separate duplex receptacle module locations are provided on a single Dimension 4 upright. The duplex modules are conveniently labeled "1", "2" and "3" on their faces to indicate which circuit is providing power. Users simply exchange the numbered duplex receptacles to access the separate power circuits. Dimension 4 Workstations are modular designs that can be assembled as a standalone workstation or "strung" together in a chain to form any type of cellular work area required. As "add on" workstations are added to the chain an electrical interconnect passes the power circuitry to all connected workstations. The PDS manages the power distribution throughout the entire string of workstations. The power outlet locations on the uprights provide convenient access to users regardless if the Dimension 4 is assembled in a single-or double-sided configuration-one of the unique benefits of Dimension 4 workstations.

The Power Distribution System is UL tested for structure and safety, and the only need for an electrician is the connection of the initial power up cable to the power source. This eliminates installation costs as Dimension 4 systems are expanded over time. PDS outlets mount flush in the uprights to facilitate accessory clearance. Details on the Power Distribution System can be found at www.IACindustries.com in the Tech Support area and in the company's "Workstation Solutions" catalog.

Based in Brea, California, IAC Industries is a prominent manufacturer of technical furniture (production workbenches, workstations, and related products) for companies performing assembly, testing, repairs, inspection and related applications across a wide spectrum of industries. IAC products are 100% made in the USA by Union Labor, and are sold worldwide. IAC Industries currently offers the widest range of workstations, workbenches, seating, and workstation-related accessories available from a single manufacturer. Products meet many industry and military requirements for static control in electronics assembly and testing. For more information, contact IAC Industries at 714-990-8997 or benchsales@iacindustries.com.
Share