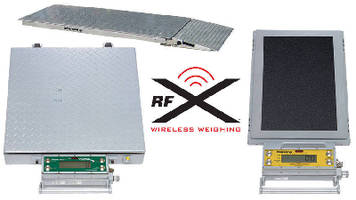 Intercomp's RFX(TM) wireless technology utilizes 2.4 GHz wireless frequencies that are accepted worldwide and the systems can communicate with up to 190 platforms at once for large, complex weighing applications. Wireless weighing saves time and improves the operation's overall safety. Intercomp's field proven wireless weighing technology is used by weighing professionals and manufacturers worldwide for the utmost in accuracy and ease-of-use.

Intercomp manufactures portable and in-ground weighing systems in stand alone, cabled and wireless models, for virtually any application, to meet the most exacting special requirements of customers throughout the world. Intercomp RFX(TM) Wireless Scales will provide the accuracy necessary to obtain reliable readings and are a complete weighing solution. Please contact Intercomp directly should your project call for a custom weighing application.