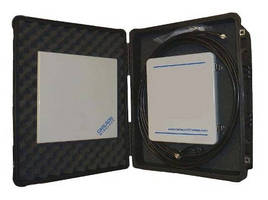 "The Trailblazer 4x4 Rapid Deployment Kit demonstrates our continued commitment to meeting the critical communications needs of our growing number of public safety end users," said Jim Carlson, CEO of Carlson Wireless. "This kit offers an amazing amount of flexibility required during times of natural disaster or emergency and can be installed in about an hour, providing voice as well as robust two-way radio backhaul and control."

The Trailblazer 4x4 is equipped with the Trailblazer radio's signature integrated channel bank, configured with four E&M (four-wire) circuits, four POTS terminal-block interfaces and an Ethernet port. To add flexibility, an adapter is included for four-wire to two-line modem applications.

The extremely versatile "4x4 Kit" uses less than eight watts and can be directly plugged into almost any power source including battery banks. A flexible 100- 260 volts AC/DC (12-48 VDC) power supply is combined with a back-up battery that can operate the system for eight hours in case of power failure.

Utilizing Carlson's TrueTDMTM technology, the 4x4 Kit is designed to meet the ultra-low, fixed-latency requirements of the P25 and IEC 61850 standards that are critical to public safety and utilities networks, including voter receiver, simulcast repeater, telecom, VoIP, WISP systems.

The 4x4 Kit comes in the 4.9 GHz licensed frequency band (also available in unlicensed 2.4 and 5.x GHz) and is equipped with 19 dBi antennas, providing a robust link up to five miles which can be extended to beyond 40 miles with the addition of higher-gain parabolic antennas.

Since 1935, APCO International has been the world's largest organization dedicated to public safety communications. APCO's annual international conference and trade show will be held this year in Houston, August 1-4, where Carlson Wireless will be showcasing their products in booth 646.