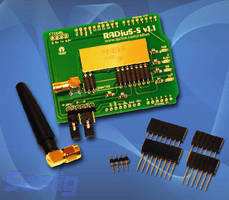 With eRA-Arduino-S900 shield, Arduino boards can communication wirelessly with other eRA module-equipped Arduino boards or PC hosts, using proprietary easyRadio technology operating in 915 MHz ISM band. Host Arduino boards can send and receive up to 180 bytes of half-duplex data per packet, seamlessly delivered to all other hosts within range. Measuring 2.7 x 2.0 x 0.4 in., shield is powered by host Arduino’s 5 V, consuming 25/35 mA in idle/transmit.


Pittsford, NY, USA:  Saelig Company, Inc. has introduced the eRA-Arduino-S900 – a ‘shield’ or stacked module that allows Arduino boards to communicate wirelessly with other eRA module-equipped Arduino boards or PC hosts, using proprietary easyRadio technology operating in the 915MHz ISM band. Host Arduino boards can now easily send and receive up to 180 bytes of half-duplex data per packet, seamlessly delivered to all other hosts within range. There is no need for any complicated ‘bit balancing’ or elaborate coding schemes.

The eRA-Arduino-S900 provides considerably greater range (typically 200m) and consumes less power than similar WiFi or Bluetooth devices operating in the overcrowded 2.4GHz bands. Frequency, bandwidth, power output, and data rate can optionally be configured to allow multiple devices to communicate free from interference from each other and any other RF devices.

The eRA-Arduino-S900 incorporates an eRA900TRS wireless module which provides simple-to-use, out-of-the-box wireless serial communication as a COMport.  No complex RF protocol software is required to create an instant bidirectional link. The 2.7” x 2.0” x 0.4” eRA-ARDUINO-S900 Wireless Arduino Shield is powered by the host Arduino’s 5V, consuming 25/35mA in idle/transmit.   An integral SMA antenna connector allows for use of an off-board antenna.  Transmit and Receive LEDs are provided to confirm communication operation.

Other innovative features available on eRA modules include:

• A digital RSSI (Received Signal Strength Indication) – no need for the host to handle A/D measurement.

• User-configurable self-coding system for interfacing to other data modules in FSK (FM) and ASK (AM).