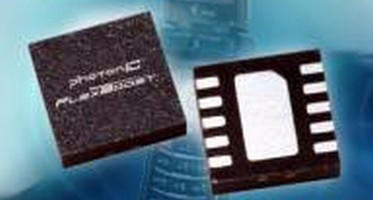 PhotonIC(TM) family is based on FlexBoost(TM) technology, which allows designers to drive several asymmetrical strings of WLEDs, as well as OLED display, with appropriate voltage on each channel using single chip and inductor. Operating with input voltages from 2.7-6 V at 1 MHz switching frequency, current is independently set for each output using external resistor or controlled by analog voltage and PWM input. Devices feature input undervoltage lockout and output overvoltage protection.

MILPITAS, Calif., May 1 / -- California Micro Devices (NASDAQ:CAMD) today introduced FlexBoost(TM), a breakthrough power saving technology, and four new products (CM93xx) in its PhotonIC(TM) family of white LED (WLED) drivers for wireless handset applications that are based on it. FlexBoost(TM) technology allows designers to drive several asymmetrical strings of WLEDs, as well as an OLED display, with the appropriate voltage on each channel using a single chip and a single inductor. At a time when multimedia capabilities such as gaming, video camcorder and imaging are becoming increasingly popular resulting in growing demands on battery life, CMD's FlexBoost(TM) architecture can improve efficiency by as much as 40 percent when driving backlight displays and camera flash from a single WLED driver solution at the lowest bill of materials cost and in the smallest footprint.

The CM93xx family includes four inductor boost products based on FlexBoost(TM) technology. Their respective drive capabilities are summarized in the following table:

Each of the products can operate with input voltages ranging from 2.7V to 6V. Current can be set independently for each output using an external resistor or can be controlled by an analog voltage and PWM input. The output voltage and current ripple are less than 1 percent. They operate at a 1MHz switching frequency, allowing the use of a smaller inductor, and feature input undervoltage lockout and output overvoltage protection.

The CM93xx family utilizes the breakthrough FlexBoost(TM) technology that allows driving multiple asymmetrical WLED strings in the most efficient way. Unlike existing boost WLED drivers, products based on FlexBoost(TM) technology can supply the appropriate voltage to each string instead of the highest voltage to all strings. A typical example is using the CM9330 to drive one string for the main display backlight with up to five WLEDs, a second string for three WLEDs and a third output for a single WLED. The required voltages in this case are 18V, 11.2V and 4.2V, respectively. Instead of supplying 18V to all channels, the CM9321 supplies the appropriate voltage to each string, resulting in a significant increase in efficiency.

Both product families are a perfect fit to drive backlight, keypad and camera flash LED su systems in the most efficient way by leveraging FlexBoost(TM) technology in a compact footprint and at the lowest bill of materials cost. Reference design kits are available to customers to allow a rapid evaluation of the advantages and benefits of this product portfolio.