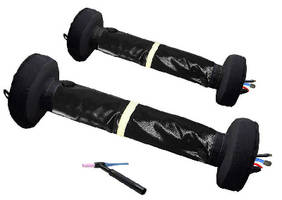 Suitable for pipe diameters from 6–96 in., HotPurgeÂ® Inflatable Pipe Purging System is designed for heat treated chrome and high strength stainless steel pipe joints where temperatures might be as high as 1,400Â°F for many hours. System includes PurgeGateÂ® device to prevent over inflation of, and damage to inflatable dams. HotPurge can be used repeatedly for weld purging and will keep oxygen levels below 100 ppm throughout welding cycle, ensuring oxide and coke free welds.

High strength steel joints, such as those used in the power industry for high-pressure pipework, need to be pre-heated for welding and also require a post weld heat treatment.

Weld joints of this nature are often purged of oxygen and welded in an inert atmosphere for various reasons, one of which is to reduce the risk of ‘sugaring’, an imperfection that could allow metal pieces to break off inside pipework and cause damage to turbines.

With the high temperatures and length of time at such temperatures, most weld purging systems are unsuitable. HotPurge® has been developed by International Weld Purging Specialists Huntingdon Fusion Techniques HFT®, an Inflatable Pipe Purging System for Heat Treated Chrome and High Strength Stainless Steel Pipe Joints where the temperatures might be as high as 760ºC (1,400ºF) for many hours.

Designed and manufactured in the UK, HotPurge® includes PurgeGate®, a revolutionary device to prevent over inflation of, and damage to the inflatable dams. No matter how high the user increases the pressure, in order to deliver more gas flow, PurgeGate® prevents too much pressure being delivered to the inflatable dams, allowing an increased flow, to achieve a lower oxygen level or faster cooling of the weld zone.

Luke Keane, Distributor Support for HFT® said: “HotPurge® allows the purge to be safely continued for up to 24 hours whilst pre-heating, welding and post weld heat-treating with the purge system remaining in place. Furthermore, the addition of PurgeGate® prevents the risk of dams bursting due to increased pressure.”

“Along with all of our Inflatable Pipe Purging Systems, our HotPurge® Systems are all manufactured in the UK, with scientific knowledge and research invested in each of our products. We do not save on quality. You can be sure to achieve perfect welds, time and time again.”

HotPurge® ensures the purge space remains tightly sealed at all times as the inflatable dams maintain an even seal throughout the weld cycle, irrespective of pressure rises or excessive flow rates of argon gas.

The large central collar dramatically reduces the space to be purged and makes it easier to reach lower oxygen levels faster than with conventional purging systems.

Each HotPurge® System incorporates an innovative central band for easy positioning inside the pipe. This band, known as RootGlo® will illuminate inside the dark pipe, for up to 20 hours, with only 10 minutes previous exposure to daylight.

HotPurge® Systems are manufactured to suit pipe diameters from 6 to 96” (150 to 2,440 mm) and both inflatable dams have pull handles securely sewn with high temperature resistant Kevlar thread that will withstand a pulling force of 1,000 lb.

These HotPurge® Inflatable Pipe Purging Systems can be used repeatedly for weld purging and will keep the oxygen levels below 100 parts per million (ppm) throughout the welding cycle, ensuring oxide and coke free welds, without the metallurgical imperfections caused by exposure to too much oxygen.

Huntingdon Fusion Techniques HFT® have a Worldwide Exclusive Distributor network, which can be found at www.huntingdonfusion.com.

Huntingdon Fusion Techniques HFT® invented the ‘Weld Purge Monitor®’ in 1975 and own all international intellectual property rights and registered trademarks.

Weld purging is the act of removing, from the vicinity of the joint, oxygen, water vapour and any other gases or vapours that might be harmful to a welding joint. Such gases may combine with the metal to form undesirable compounds that may reduce corrosion resistance or may be instrumental in creating cracks or other structural defects in metals.