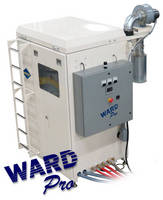 Offered as standalone system, WARD Pro extends life of consumables for waterjet companies of all sizes. System takes sludge abrasive (generally collected and disposed of)Â from tank;Â separates only good, reusable abrasive; and dries it. At least half of sludge abrasive is typically recoverable as usable abrasive which cuts at same speed with same flow rate as new.

WARDJet, Inc., the leading innovator in abrasive recycling technology, is continually improving and perfecting their patented process of recycling used waterjet abrasive. With recent design enhancements abrasive recycling is now possible for all waterjet companies and is more affordable than ever.  WARDJet has proven abrasive cost per part can be drastically reduced with this standalone system.

In previous years, waterjet abrasive recycling was found to be most successful for companies using large volumes of abrasive who could recoup their investment in a short period of time. With recent ground breaking advancements to the WARD Pro system, this money saving process can be used by waterjet companies of all sizes. The latest WARD Pro has a new design that is more efficient, requires less maintenance and extends the life of consumables.

Every waterjet company has sludge abrasive which is collected and then often thrown away. Typically, at least half of this sludge is recoverable as usable abrasive. The WARD Pro takes this sludge from the tank and after separating only the good, reusable abrasive, dries it. Recycled abrasive has been proven to cut at the same speed with the same abrasive flow rate as new. WARDJet's re-designed website  includes  the WARD Pro Savings Calculator (input specifics  to discover how to reduce abrasive costs to as low as $0.03 per pound). Contact WARDJet’s sales department at 330-677-9100, ext. 6; sales@wardjet.com; www.wardjet.com.
Share