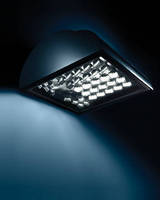 Wall Director LED illuminates ground surfaces, canopies, ceilings, and architectural features and includes MicroEmitter(TM) optical system that shapes, points, and controls beam of individual clusters of LEDs. Available in WD14 and WD18 sizes, it can be installed in up and down orientations and has EmitterDeck design that allows change-out in field. Unit is designed with Dual Thermal Management System, conduction and convection, to absorb and dissipate heat.

Every aspect of its form expresses functional qualities that have been engineered into the product's design. Flowing lines cascade from the wall on the surface of the stylized, modern shaped housing which adds to your structure's architectural relevance.

The Wall Director LED is designed to employ Kim Lighting's patent pending MicroEmitter(TM) technology featuring its unparalleled ability to capture and harness light using a patent pending optical system that shapes, points and tightly controls the beam of individual clusters of LEDs within independent MicroEmitter modules. The result is placing light where it is needed, creating superior uniformity by minimizing overlapping horizontal footcandles, and in turn reducing energy waste. Furthermore, the Wall Director LED is designed with an upgradeable EmitterDeck design allowing ease of change-out in the field as LED technology advances.

Key product attributes and benefits include:

o Can be installed in both the up and down orientations without overheating due to heat rising.

o Designed with a Dual Thermal Management System, conduction and convection, to absorb and dissipate heat, and introduces an exclusive LifeShield Protection System monitor to maintain lumen loss depreciation to less than 15% at 100,000 hours of operation (based on IESNA LM-79 and LM-80) in extreme and fluctuating environmental conditions without overheating or failing.

o Designed with an exclusive EmitterDeck design allowing ease of change-out in the field as LED technology advances.

o Tool-less entry to optical chamber and driver assembly for ease of maintenance.
(Model WD14 only)

Kim Lighting is the world's foremost designer and manufacturer of quality, high-performance outdoor architectural and landscape lighting products. These include roadway, pedestrian, low-level and buildingmounted solutions for contemporary or traditional commercial, industrial and institutional applications.

Kim Lighting is leading the industry in the development of LED products that use the latest technologies and determining standards for the capabilities of LED for general outdoor illumination. Kim Lighting, a division of Hubbell Lighting, Inc., was founded in 1934 and is based in City of Industry, Calif. More information is available at www.kimlighting.com.
Share