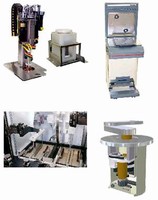 Designed for 300 and 200 mm wafers, Wafer Flip Module is compatible with edge grip and vacuum paddle end effectors. It has 2 motors, one for flipping and one for wafer gripper mechanism. Rotation of 180Â° can be done in less than 2 sec, with clamp speed at less than 1 sec. Flipper is designed so that no particles are detected in wafer path during airborne dynamic motion tests. All motors and motion mechanisms are contained in purged enclosure to eliminate particle generation.


Fremont, CA Owens Design Inc., a company providing capital equipment design and manufacturing services to high tech industries, announced today that it has introduced a "Wafer Flip Module" to its family of custom wafer handling solutions. New manufacturing processes and the increasing need for backside contamination inspection require wafers to be loaded to the process or inspection chamber in a 90 or 180 degree "flipped" orientation.

The Wafer Flip Module is designed for 300mm and 200mm wafers and is being implemented by a leading supplier of standard EFEMs (Equipment Front End Module). The Wafer Flip Module is compatible with both edge grip and vacuum paddle end effectors. The Wafer Flip Module has two motors, one for flipping and one for the wafer gripper mechanism. A 180-degree rotation of the wafer can be done in less than 2 seconds, with clamp speed at less than one second. The Flipper is designed so that no particles (0.10 micron or greater) are detected in the wafer path during airborne dynamic motion tests. All motors and motion mechanisms are contained in a purged enclosure to eliminate any particle generation during the wafer flipping process. The system is designed with all SEMI and CE compliance and mounts to pre-existing M6 holes in standard EFEMs.

Since 1982 Owens Design has been an innovative and reliable design and manufacturing partner for equipment companies in the semiconductor, data storage, biotech and related industries. As a turnkey source for design and manufacturing of complex capital equipment, Owens Design has served customers such as Ultratech, Thermawave, KLA-Tencor, Asyst Technologies, Lam Research, Teradyne, Credence, Mattson, and Novellus..
Share