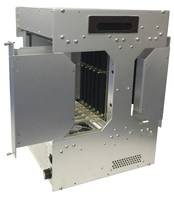 Pixus Technologies, a provider of embedded computing and enclosure solutions, now offers a development enclosure for 3U, 6U, or custom sized boards with sidewalls that can be removed. This feature allows a system to be enclosed for thermal testing and the walls to be taken out for ease of access to boards inside the chassis.

The VPXD1000R holds up to eight backplane slots at a 1.0” pitch. Pixus offers 3U and 6U backplanes in OpenVPX, CompactPCI Serial, VME64x, and legacy CompactPCI and VME designs. The card guides can be adjusted in .2” increments to accept various slot pitches. Further, Pixus offers removable conduction-cooled card guides. This allows IEEE 1101.2 conduction-cooled modules to be tested next to other air-cooled cards inside the same enclosure.