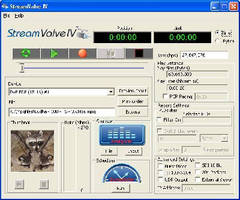 Building on the many capabilities of DVEO's best-selling StreamValve III software, the new StreamValve IV features an advanced playback scheduler to play transport streams daily, weekly, monthly, or once only.

Stream Valve IV includes a built-in transport stream analyzer which provides a complete view of all the SI or PSIP tables. Click on a PID (packet identifier) and the analyzer will present considerable information about that PID - such as 1) stream type, 2) stream tag information, 3) packet counts, 4) stream statistics, 5) CRC error counts, 6) packet size, and 7) bit rate.