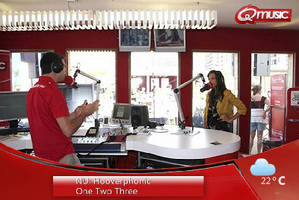 Designed to work with any Granite(TM), Mica(TM), or Slate(TM) system, VOX(TM) creates voice-activated video productions. System eliminates need for operator during live productions as it detects which microphone is being used and uses software to switch to interesting camera position and add appropriate graphics. Housed in 1 RU chassis with 8 microphone inputs, VOX(TM) integrates with built-in Fluent(TM) Macros to create automatic video-follow-audio. Multiple macros can be assigned to each microphone.

Billerica, Massachusetts - Broadcast Pix(TM) today announced VOX(TM), a breakthrough product for cost-effective live video production that works with any Granite(TM), Mica(TM), or Slate(TM) system to produce voice-activated video productions. VOX eliminates the need for an operator during live productions, as it detects which microphone is being used and uses sophisticated software to switch to an interesting camera position and add appropriate graphics. VOX is ideal for government and corporate meetings, interviews, video coverage of radio programs, and other productions with multiple microphones, and can be used for television broadcasts, Internet streaming, and in-house projection.

While VOX can simply switch cameras, it has the intelligence to do much more. VOX integrates with Broadcast Pix's built-in Fluent(TM) Macros to create automatic video-follow-audio. Fluent Macros can be programmed to select camera presets, roll clips and animations, add or remove titles, and even execute powerful compositions such as up to six picture-in-pictures for interviews. Multiple macros can be assigned to each microphone - and selection criteria can be established - so automated productions can offer variety in shot selection and graphics, as if a technical director was at the controls.

"Broadcast Pix is known for integrated production systems that create compelling live video with minimal staff. Now, VOX can create great video with no operator at all," said Ken Swanton, president of Broadcast Pix. "It's a breakthrough in cost-effective production."

VOX is already in use at Q-music, a radio network in Belgium and Holland. Q-music broadcasted live concerts and other events from its Q-Beach House in Ostend, Belgium, and streamed video programming on the Internet. The video productions were part of a pilot project for the network's upcoming studio-based "Visual Radio" programming, which will be produced in three facilities with VOX and Broadcast Pix Mica systems.

The house was rigged with 12 cameras, including four in the on-site radio studio that were controlled through VOX. With the help of integrator Burst Video, Q-music created several macros for each studio microphone. As a result, while the video followed the audio, there were a variety of directing commands (selected randomly by the system) to produce more appealing production value.

"It is easy to put a camera in a studio," said Rudi Wynants, engineer at Q-music, "but it is not so easy to make this interesting to watch. Broadcast Pix VOX makes it more dynamic by not giving the audience the feeling that everything is automated by a computer. For normal operations, the system runs completely standalone."

Housed in a 1 RU chassis with eight microphone inputs, VOX includes camera control software for Panasonic and Sony robotic camera systems, and connects to any Broadcast Pix system via an RS-232 serial cable. Multiple VOX boxes can be cascaded to support up to 104 microphones.

Conditions can be set to prevent coughs or one-word comments from changing cameras, minimizing unnecessary camera changes. Microphone inputs can also be prioritized, so a host, for example, can be given priority over guests. Plus, a host can control VOX using a small override panel, through the included SoftPanel software on a laptop or Android device, or with an iPad or iPhone app. As a result, the host can roll an introduction or a commercial, or even override the automated VOX control to bring up a specific shot.

VOX will be available worldwide in December 2011. For more information about VOX, including a video created using VOX with no operator, please visit www.broadcastpix.com/VOX.

Broadcast Pix is the leader in integrated live video production systems. Its systems provide the best control surface for combining cameras, clips and graphics to create compelling live video. These surfaces enable total control of the built-in multi-format switcher, clip store, graphics system with a Harris or Chyron CG, and device controls. Its Fluent(TM) workflow enables files and data to be easily incorporated from other parts of the studio. Broadcast Pix systems are a fraction of the cost of a conventional control room to buy, staff and operate. System range from small systems controlled by a touch-screen to sophisticated 2 M/E control panels. Customers include leading broadcast, corporate, education, religious, government, webcast, entertainment and mobile studios in more than 90 countries. Learn more at www.broadcastpix.com.