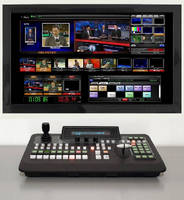 
The First Switchers with an Integrated Server for Exceptional Workflow

The Granite Switcher provides simultaneous multi-definition SDI I/O for 1080i/50, 720p/50, and 576i/50 sources - and is upgradable to 1080p, a higher quality emerging HD standard. The companion Granite Server completes the video production system by running Fluent workflow software, which provides up to 120 hours of clip store, animation stores, a graphics system with a new Harris CG, a multi-view that displays video and file sources, watch-folders that streamline file import from editing systems, and macros for file-based effects.

Available in three models -- the 1 M/E Granite 100 and 1000 and the 2 M/E Granite 5000 - the new product line provides an easy upgrade path between models. Customers can also upgrade to Granite from current Broadcast Pix Slate(TM) hybrid HD/SD/analog systems, which use the same control panels and Fluent workflow software. Granite system prices start at $20,900, which is a fraction of the cost of a legacy control room with separate switcher, multi-view, video server, and graphics system. The 50Hz version of Granite is expected to ship this month.

"Our new Granite product line represents a true milestone in live video production," said Ken Swanton, President, Broadcast Pix. "For the fraction of the cost of purchasing and staffing a legacy control room, Granite provides all the elements of a control room in a much less cumbersome native HD system, with the best file-based live workflow tools in the industry. You no longer have to compromise your budget to create highly engaging live HD video."

Housed in a 3 RU frame, the Granite Switcher offers 11 HD/SD-SDI video inputs (expandable to 22), plus the equivalent of 14 more inputs from the server via its PCI Express connection, including a clip channel (with key), two animation channels (with key), and four graphic channels (with key). Each SDI input automatically detects and sets its format to 1080i, 720p or SD (plus 1080p in the future). Inputs can handle 16:9 and 4:3 content without stretching images, as well as synchronous and asynchronous sources.

The switcher also offers eight outputs, six HD/SD-SDI (expandable to 12) and two DVI. It has up to six keyers with DVE picture-in-picture, and it excels in live event production, as it has very low overall constant system delay of just 33ms, including format and aspect conversion, PiP and graphics.

The separate 2 RU Granite Server features an Intel Quad processor and can have up to 2 TB of storage in a high reliable RAID 10 array. In addition to all the Fluent workflow software, it includes a new Harris Inscriber GS CG, which features intuitive creation of broadcast quality graphics and support for a wide variety of international languages including Asian characters. Plus, a new Fluent Rapid CG option streamlines CG creation and can link to a database.

The server also offers optional software to control other studio devices, including audio mixers, robotic camera control systems from Panasonic, Sony, Telemetrics, and Hitachi, streaming appliances from ViewCast, and video servers from Harris, 360 Systems, and Omneon. The new CG and Omneon support are also available on Slate systems.
The Granite 1000 and Granite 100 share the same feature set, but the Granite 1000 includes a physical control panel with push buttons that dynamically change to display the file name of the content. The entry-level Granite 100 is controlled from a Web browser-based SoftPanel, its multi-view, or the new Broadcast Pix iPixPanel(TM) application for Apple iPad. The Granite 5000 has a larger 2 M/E control panel, and brings the power of 2 M/E productions, such as dual screen shows, to new applications with its unprecedented price point and streamlined workflow. New optional remote panels are also available.

Broadcast Pix is the leader in integrated live video production systems. Its Granite native HD and Slate hybrid HD/SD/analog systems create compelling live video. They run unique Fluent file-based workflow software that streamlines production and improves functionality. With its integrated switcher, multi-view, CG, clip and graphic stores, and aspect and format conversion, Granite and Slate are a fraction of the cost of a legacy control room to buy, staff and operate. They are future-proof, as they can upgrade to 3Gbps 1080p. Customers include leading broadcast, webcast, podcast, entertainment, mobile, corporate, education, religious, and government studios in more than 70 countries. Learn more at www.broadcastpix.com.