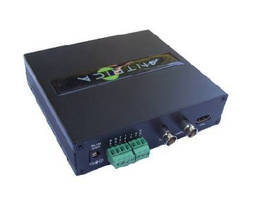 
BRAY, England, -- Antrica today announces the worldwide release of its first Decoder for IP Network cameras, the ANT-36000 (http://www.antrica.com). IP Network Cameras all generally conform to two standards, ONVIIF and PSIA. The ANT-36000 allows users to decode any of these network cameras and display them on a monitor. As the CCTV industry moves to Network IP cameras the usual method to decode the network streams relies on a PC/Laptop or a Network Video Recorder. Les Litwin Sales Director of Antrica commented, "This low cost Decoder offers users of IP cameras an alternative way to display the video stream without the complexity and cost of needing a computer or Network Video Recorder. It's similar to the Spot Monitor in the old analogue DVR world."

To give users the ultimate flexibility the Antrica Decoder offers 3 different video outputs, 3G HD-SDI, HDMI and Composite video. This gives users the opportunity to record the IP camera network stream using an older analogue CVR as well as display the video on a TV or Monitor via HDMI. The 3G HD-SDI output is typically used in the Broadcast industry but many CCTV systems are now using recorders with HD-SDI inputs. This makes the ANT-36000 Decoder usable in both CCTV and Broadcast industries.

A typical problem since the move to IP cameras is that the traditional Spot Monitor which displayed a quad image of 4 analogue cameras, has mainly disappeared.

Using the Antrica decoder in combination with the ANT-35000 Encoder allows CCTV operators to stream Quad 8x or 16x images over any LAN or WAN and display them remotely using the ANT-36000 Decoder.  Any common RTSP RTMP or MPEG TS stream can be decoded and displayed making this decoder extremely flexible in operation. PTZ cameras can be controlled via the RS485 interface and the unit powered via PoE.

The ANT-36000 is available now from stock at under US$700 directly from Antrica and can be shipped worldwide or via distribution in the USA. Visit http://www.antrica.com for full technical data and email sales@antrica.com to purchase.

Antrica is a UK company Manufacturing and selling a range of video encoders and decoders for CCTV Broadcast Signage AV and Medical markets. Video encoding at full HD 1080P60 and streaming over any LAN or WAN. Antrica has been in business for 15 years and rapidly growing as a technology supplier.