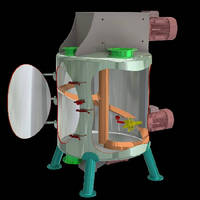 Featuring inclined and optionally sine wave-shaped agitator helix, Vertical Mixers provide residual removal rate of 99.983%. After output, residual content in single shaft mixer is only 240 g for 2 mÂ³ of mixed product. Mixers can be operated with varying fill ratios from 10-100%, and just one mixer can be used for gentle homogenization of products as well as intensive de-agglomerate and micro-fine blending of high-viscous fluids.


At first sight, every industrially applicable mixing principle already seems to be invented for the solids mixing technology. These processing machines however are continuously refined and improved. Their objective, amongst other things, is to simplify the production of appliances. The refinement furthermore aims at increasing the user advan-tages for the operator and enhancing the production processes. The engineers also focus on the optimisation of the hygiene and the mixing quality. This is where amixon GmbH introduces a new development, which enables an almost complete removal of the mixed product, without leaving any residues whatsoever, from the mixer.

This innovation is based upon the vertical mixers, which feature an unchallenged effi-ciency due to their design. Spiral-type screw band agitators rotate around a vertical axis, thus screwing the products to be mixed upwards in the periphery of the mixing chamber. Once arrived on top, they flow downwards in the centre of the mixing chamber amenable to the gravitational force. As a rule, the vertical screw band agitators
turn slowly: in most cases, their peripheral speed is 0.8 m/s to 2.5 m/s. That is why vertical screw band mixers mix gently and do not change the granulometry of the mixed prod-uct. A major advantage is that the agitators are only supported on bearings and actuated from top. In this respect, they meet the most stringent hygienic requirements, whilst requiring almost no maintenance.

However, in a number of fields of application, the users of vertical mixers so far were always confronted with a disadvantage: if the mixed products are viscous or sticky (es-pecially fine disperse or moisturised/greasy), the helix of the agitator can be covered with residues of the mixture after the output of the product. In that case, a centrifugation either a manual cleaning has to take place. However, bearing the ATEX directives in mind, centrifugation is only authorised when the mixed products are not inflammable or dust-explosive.

This is where the patent-protected innovation from amixon GmbH comes to the rescue. The agitator helix of the new generation of vertical mixers from amixon is inclined and optionally sine wave-shaped. Research has revealed that the mixing efficiency is con-siderably enhanced in this way. This constructive detail furthermore significantly also increases the emptying rate. After output, the residual content in an amixon
single shaft mixer for instance is only 240 grams for 2 m³ of mixed product, i.e. a residue removal rate of 99.983 % (see image).

The first users of this new generation of amixon mixers basically consider that this new technology features three advantages. First, the mixer can be operated with varying fill ratios from 10 to 100 %. This provides for a smoother adaptation to the varying re-quirements of the order. Secondly, one mixer can be used for the extremely gentle ho-mogenisation of products, but also for the intensive de-agglomerate and micro-fine blending of high-viscous fluids. If just one mixer needs to be used for varying mixing applications, flexibility is considerably increased. Thirdly, the high removal rates of the residues lead to savings with respect to raw material and time in actual practice. The production process is accomplished in a much more hygienic manner and the volume of residual product, which is unsuitable for further processing or sales, decreases.

Last but not least, the cleaning and machine set-up times also diminish, as a result of which the mixing plant achieves higher productivity rates.