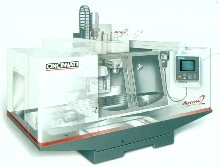 Enhanced operator convenience features include high intensity lighting and end panel windows for increased visibility within the machining area. In addition, an integral
workstation tray is incorporated into the control station.

The fast, powerful Acramatic A2100 CNC from Siemens is standard on the Arrow Series 2 VMC-1250C. Operating on a Windows NT® platform, the A2100 provides a user-friendly system with the most comprehensive specifications available today. A touch screen control and handheld pendant place the control functions at the operator's fingertips, reducing setup time.

The standard third-party interface allows the use of proprietary software, such as CAD/CAM systems and SPC programs to run on the control. This open-architecture system, which is based on a true PC platform, offers unrivalled communication
capabilities.

The entire new Arrow Series 2 line -which encompasses the VMC-500, VMC-750, VMC- 1000 and VMC- 1250C -are some of the most reliable, accurate and user-friendly vertical machining centers in today's marketplace.
Share