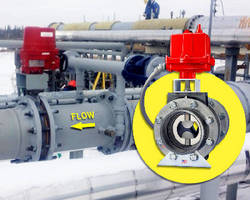 
A static mixer for bitumen processing that mixes multiple diluents to the correct viscosity and density, allowing pumping over a wide range of flow rates, is being introduced by Westfall Manufacturing Company of Bristol, RI.

The Westfall Model 2900 Variable Flow Static Mixer for bitumen blending, viscosity, and density control is combined with their wafer-style static mixer to achieve a low CoV (coefficient of variation) of injected diluents. Capable of achieving a uniform concentration of injected materials within a short downstream distance, while meeting the maximum pressure loss criteria, this highly efficient mixer reduces consumption of the bitumen diluents.

Capable of mixing well at low flow rates and without a head loss penalty at high flow rates, the Westfall Model 2900 Variable Flow Static Mixer for bitumen blending and viscosity control creates shear-induced turbulence which produced superior fluid mixing.  Accommodating flow rates at up to a 20 to 1 turndown ratio, a computational flow model of this mixer for bitumen viscosity control was created by Alden Research Laboratory, Inc.

The Westfall Model 2900 Variable Flow Static Mixer is made from 316SS and is available in 2” to 60” I.D. sizes, priced according to application.