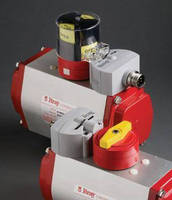 In addition to the factory pre-aligned Standard Targets, Bray now offers Adjustable Targets. These allow the customer to individually set both valve position signals at incremental angles before or on the fully open and fully closed positions. DC and AC targets are stainless steel and nonmagnetic. These targets will not attract and be falsely tripped by loose metal objects. Magnetic targets are used in BUS network units.

The local LED Indicators on many units were increased to not only verify that the sensors are electrically functioning and that the target position has been reached, but also to indicate power/network status. Another added feature is an optional Valve Position Display. Double the height of the standard position pointer, the high visibility display is prominently labeled and color coded: yellow for open, black for closed. Both position indicators locally indicate valve position throughout the full range of travel.

The Series 52 is engineered to be impervious to vibration, moisture and most chemical and corrosive agents since all internal components are completely encapsulated with epoxy resin inside the rigid, fully-sealed polymer enclosure. Multi-pin electrical connectors are weatherproof and provide quick-connect installation. Standardized factory pre-wiring prevents field wiring errors. The 2N1 ProxSensor mounts directly to Bray pneumatic actuators, eliminating contamination buildup between sensor and actuator.