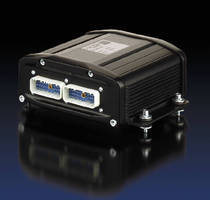 (CHARLOTTE, N.C.)- HAWE Hydraulics, a leading supplier of sophisticated controls to the mobile and industrial markets has added the new type PLVC 8x2 to its line of programmable logic valve controls. While staying consistent with existing models, this control is equally designed for ample control of complex hydraulic systems. The instantaneous cycle times of the control make it a perfect match for complex regulating and control tasks.

The control links analog, digital and other components with CAN-BUS interface, including: joysticks, potentiometers, stop switches, pressure switches, rotary encoders, speed sensors, valves and many others.

The type PLVC 8x2 has a number of inputs and outputs making it sufficient for even demanding hydraulic systems. It includes 16 proportional outputs, enabling the control of eight functions of the proportional directional spool valve, type PSL, via eight twin solenoids. The basic design also contains six digital frequency inputs, as well as eleven analog inputs, which can be software-switched between 0-5V, 0-10V and 4-20 mA.

The basic unit features a RS232- and a CAN-BUS interface. The programming system supports the CAN protocols CANOpen as well as J1939. The hardware's core is a processor of the ST10 family that is optimized for mobile applications.

The sturdy die casting housing of the control has been optimized to meet the needs of mobile applications and can be mounted anywhere on a vehicle. Combined with a neatly installed connector, the unit complies with an ingress protection rating up to IP 69K.

The number of inputs and outputs of the PLVC 8x2 can be doubled with an extension board, which integrates a second CAN-BUS interface. Other options include a clock and memory for data logging, which is used to record measured values or errors.

The control is SIL2-enabled and is applicable for a wide range of mobile applications, including: cranes, crane systems, construction machinery, complex lifting installations, and forestry equipment. It is well suited for placement in tension hydraulic systems such as machine tools and presses.

Since May 1997, HAWE Hydraulics' vision has been to be the leading supplier of sophisticated controls to the mobile and industrial markets in North America. Based in Charlotte, NC, HAWE offers application engineering, sales and service, after sales support and over two million dollars of product in inventory. HAWE Hydraulics is positioned to respond quickly to service needs, as well as provide prototypes in a timely manner. Headquartered in Munich Germany, HAWE Hydraulics is an ISO 9001:2000 certified international supplier with a strong focus on rapidly-developing niche markets.
Share