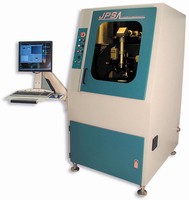 
Hollis, New Hampshire, USA - J. P. Sercel Associates announces the introduction of its new IX-200 series of laser systems, available in both DPSS (solid state) and Excimer UV laser configurations. The IX-200 ChromaDice(TM) DPSS version is a high-precision wafer dicing (singulation) system also suitable for wafer trimming and scribing applications. Its UV diode-pumped solid-state (DPSS) laser system delivers high-speed wafer dicing and cutting with typical yields greater than 99% at less than $2 per wafer. The process is tolerant of wafer warp and bow and suitable for all wafer types. The IX-200 system is also available in an excimer laser version for via drilling, micromachining, thin film patterning and many other semiconductor packaging applications including LED liftoff.

The Class 1, fully enclosed IX-200 ChromaDice(TM) is available in 266nm or 355nm UV-DPSS laser wavelengths for a wide range of process capabilities; it can achieve cuts as narrow as 2.5 microns in width, yielding as much as 24% more die per wafer with die yields greater than 99%. It delivers excellent results on GaAs, Si and other materials and scribes up to 6" wafers, including sapphire LED wafers.

The IX-200 ChromaAblate(TM) system is an excimer laser configuration. At a 248nm wavelength, it is suitable for micromachining of Si, GaN, GaAs and other III-V materials, as well as polymers, ceramics and many others. An optional 193nm beam delivery package is also available, useful for polymers that do not couple well with the longer UV wavelength (e.g., Pebax), as well as many of the more optically transparent materials that do not machine well under 248nm wavelength UV laser energy.

In making the announcement, Jeffrey P. Sercel, President, said, "The IX-200 is a new series of industrial-grade UV laser workstation, competitively priced and designed to pay for itself in months rather than in years. Despite its lower initial investment, it delivers industrial-grade, robust performance; it is truly a cost-effective tool for 24/7 production."