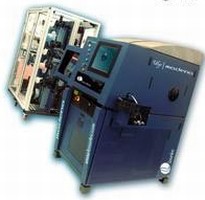 Laselec Launches the ULVS 990 Modena, a New UV Laser Wire Marking Machine, the Most Innovative on the Market

LASELEC introduces the ULYS 990 Modena, its newest laser wire and cable marking machine, suitable for cables used in aerospace, automotive, electronics, and other industries. As a result of the company's R&D program and of more than 20 years of experience, this machine brings exclusive features and advantages to meet the expectations of the most demanding users including a wider marking zone and higher frequency of shots, more than twice the regular number, in the new "Boost" mode.

The ULYS 990 Modena brings new features such as an improved and more compact design, four printing fonts as standard with two horizontal and two vertical orientations and 90 characters per font including upper and lower case. It allows up to 128 characters per identification mark with specific information printed at cable ends, as well as bar code 39 printing capability.

The ULYS 990 Modena is also equipped with an exclusive process called "Twin Shots," patented by LASELEC, which enables the user to choose the appropriate production mode according to need. The "Boost" mode marks at an extremely high speed and is best for marking very long identifiers with small spacing and bar codes on wires and cables in reel-to-reel configuration using the LASELEC re-spooler with no cutting. The "Economic" mode is perfectly suited to mark short and common identifiers with longer spacing. This mode will increase the lifespan of the flash lamp and save energy.

LASELEC will be exhibiting its UV laser wire marking machines at the following trade shows in 2008: the AEA (Aircraft Electronics Association) Convention in Washington, D.C., April 23 to 26 at booth 831; the Farnborough Air Show in Farnborough, Hampshire, UK, from July 14 to 20 in Hall 2 and booth number C15; and the NBAA (National Business Aviation Association) Annual Meeting and Convention in Orlando, Fla., from October 6 to 8.

About LASELEC:
The wire/cable marking machines developed by LASELEC are primarily used in the demanding sectors of the aerospace, automotive, rail, and telecommunication industries. The concept of the LASELEC machines is based on a controlled laser technology, which guarantees the users non-aggressive marking and compliance with the highest quality requirements in wire processing. It is particularly important for aerospace wiring. LASELEC is the leader in Europe, Africa, the Near East and Asia-Pacific, in the field of UV laser cable marking. The company, which has just opened an office in Sydney, Australia, has also increased its market share in the United States thanks to the dynamism of LASELEC Inc. LASELEC was awarded the "International Development" trophy by the DCF in October 2007, in recognition of its sustained annual growth rates over the past few years.