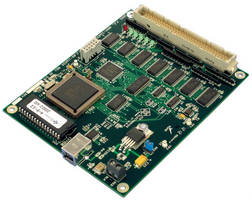 Used for controlling digital devices via USB, Model 2003 interface board provides 40 parallel DIO lines that can be user-configured as inputs or outputs in 8-bit bytes. Data transfer can be accomplished directly to/from specific byte; by setting, reading, or pulsing individual bits in byte; and via strings of data characters to/from multiple bytes. Handshake lines are provided for synchronizing data transfers from external devices or for latching data into external devices.


PLEASANTON, CA. Today ICS Electronics announced a new USB-to-Digital Interface for controlling digital devices from the USB Bus. Called the Model 2003, this new small Interface Board provides 40 digital I/O lines that the user can control from any computer with a USB bus interface. The 2003 is interchangeable with ICS's 4803 GPIB-to-Digital Interface and 8003 Ethernet-to-Digital boards and expands the user's choice of interfaces for controlling digital devices, relay matrices or acting as an USB interface for a test chassis or for a non-USB instrument.

The Model 2003 is an USB to Digital Interface that provides 40 parallel I/O lines that can be user configured as inputs or outputs in 8-bit bytes. Data transfer can be done by a combination of three methods depending upon the needs of the devices connected to the 2003. Data can be transferred directly to or from a specific byte; by setting, reading or pulsing individual bits in a byte; and by strings of data characters to or from multiple bytes. Handshake lines are provided for synchronizing the data transfers from external devices or for latching data into external devices. The 2003 is an IEEE-488.2 compatible Interface that responds to the 488.2 common commands and uses SCPI commands to configure its digital interface and to transfer data. The 2003 can also monitor 15 input lines and generate Service Request Messages when an enabled line changes state. The user can customize the 2003's IDN message and configure the I/O lines to integrate the 2003 as part of his system. All settings are saved in flash memory.

The Model 2003 is a USB 2.0 fast device with data rates up to 12 MHz and is compatible with the older USB 1.1 ports and hubs. The 2003 includes an installer for Microsoft's Virtual COMM Port Driver for Windows XP, Vista and Windows 7 operating systems. The driver is maintained by Microsoft so it will never become obsolete and will be available on Windows 8 when that system is released.

The 2003 can be controlled several ways: The Model 2003 can be accessed by LabVIEW, VEE, Visual Basic and C language application programs that make VISA calls by selecting the 2003 as an ASRL resource. Both Agilent and National Instruments provide VXI-11.3 compliant VISA libraries. Windows programmers who do not want to use a VISA library can include Microsoft's COMM functions in the application program.

Pricing for the Model 2003 is $345 each in quantities of 1 to 4 units, FOB Pleasanton, California. Delivery is 3 to 4 weeks ARO. Each 2003 includes a full manual and a Support CD with the Keyboard and Driver Installation programs.