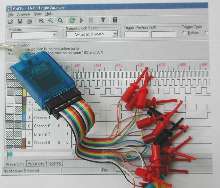 Fairport, NY: ANT16 is compact, easy to use, powerful, and inexpensive logic analyzer that can travel anywhere with you. Powered solely from a PCs USB port, it samples 16 channels (2048 samples deep) at an amazing 500MHz asynchronous (100MHz synchronous) sampling speed. Matchbox-sized ANT16 runs on any recent version of Windows and its software features Simple or Complex Triggering. Captured traces may be viewed on PC screen, or saved as text or csv files. The control panel interface makes step-by-step setup for instrument or triggering very easy.

A Logic Analyzer is essentially a multi-channel version of a digital oscilloscope. However, the logic analyzer only recognizes two logic levels - 0 and 1, and usually has 8 or more channels for simultaneously viewing logic states and timing. Also, logic analyzers usually implement much more complex triggering than oscilloscopes. A logic analyzer can continuously sample the input signals and write the values to its memory buffer, looping round from the start to the end of memory. It stops this process when it triggers, the trigger moment being the point at which a desired event occurs. The event could be a rising or falling edge or a pattern of zeroes and ones across the signal wires. Pattern triggering is a valuable feature that enables sampling when several signals are AND. For instance, trigger when chip select is high, the write strobe is low, and the other signals are in any state. Complex triggering may be utilized to drive a state machine within the logic analyzer. The state machine moves between states and eventually arrives at the trigger condition, based on logic patterns, counts or sequences.

For some applications, you can never have too many channels, and logic analyzers are available with several hundred channels. These systems are used to debug complex microprocessor buses and it is a lot of work to connect the myriad probes involved. ANT16 is aimed at a different scenario, when you want to see exactly what is happening on a few signals. Typically, ANT16 is hooked up to a few signals to give a trigger source, and to one or two signals which are being debugged. For instance, when debugging a first-in/first-out (FIFO) memory ANT16 can look at full and empty indicators, read and write strobes, and a few other signals for reference.

Engineers think that maximum sampling rates can never be too fast. ANT16 samples at up to 500MHz, which gives a timing resolution down to 2ns. Of course, the sample buffer fills up quite quickly at that speed, so for slower signals the sampling speed can be stepped down in stages to a minimum of 100Hz, which gives a timing resolution of 10ms. Sampling beyond 500MHz would need sophisticated probes - which would cost more than ANT16's meager $299!