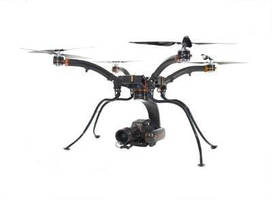 Accommodating advanced cameras and lenses, including 6K RED Weapon and Canon 17–120 mm Lens, SHOTOVER U1 is designed for broadcast, motion picture, law enforcement, and industrial survey markets. Gimbal can be detached from multirotor and used as standalone gyro-stabilized platform for mounting on motorcycles, cars, boats, and cables. Other features include redundant flight control and battery systems, customized downlink with 2 HD video feeds, and optimized stability even at full zoom.

See the SHOTOVER U1 at the International Drone Expo, Booth 211, at the LA Convention Center

LOS ANGELES,  -- SHOTOVER, the maker of high performance stabilization platforms, announced today the debut of the SHOTOVER U1, the world's first professional grade unmanned aerial vehicle (UAV) for the broadcast, motion picture, law enforcement and industrial survey markets.  The U1 sets a new standard for drone cinematography and imaging as the first solution to accommodate cinema quality cameras and lenses including the 6K RED Weapon, ARRI Alexa Mini, Phantom Flex4K and Sony F55 cameras and the Canon 17-120mm, Fujinon 85-300 and Optimo 28-76 lenses.  This flexibility allows operators to carry the right payload for whatever the mission requires.

Further increasing functionality, the SHOTOVER U1 gimbal (U1g) can be detached from the multirotor and used as a standalone gyro-stabilized platform for mounting on motorcycles, cars, boats, cables and almost anything that moves.  Buyers can choose between the U1, which includes both the multirotor and gimbal, and the U1g, which is the gimbal without the aerial component.  Other U1 features include redundant flight control and battery systems, customized downlink with two HD video feeds and unparalleled stability even at full zoom.  Preorders for the U1, which will begin shipping in Q1 2016, have already topped several dozen units.

The U1 builds upon SHOTOVER's expertise in the aerial cinematography space with its industry leading SHOTOVER F1 and SHOTOVER K1 gyro-stabilized camera systems.  Recent credits include Hollywood blockbusters Jurassic World, Furious 7 and Spectre; SHOTOVER has also been tapped by the BBC for filming telephoto 4K footage of wolves, bears and caribou in Canada's remote Northwest Territories for a six-part wildlife documentary series scheduled to air in 2016.

"The SHOTOVER U1 is the first drone specifically designed for broadcasters and big budget filmmakers, allowing productions to employ the same professional grade cameras and lenses they choose for their principal photography," said SHOTOVER president Alex Giuffrida.  "Coupled with unsurpassed reliability and support, the U1 will enable cinematographers to capture breathtaking shots, including those that wouldn't be possible with a helicopter or crane - such as from inside a waterfall - without having to sacrifice image quality.  For law enforcement and industrial users such as those from the oil & gas, agriculture and real estate industries, the U1 offers a drone option that can be employed in place of aircraft-mounted solutions."

The U1's redundant battery system with on screen feedback of cell voltage and capacity allows the pilot to turn off a failed battery cell and get the ship home safely.  And the redundant flight control system provides operators with the ability to quickly switch to a back-up flight controller if the need arises.  Additional features of the U1 include a user friendly design that allows operators to easily swap cameras and lenses during a shoot, 10X more pan motor torque than prosumer gimbals and a unique balancing system for unshakeable stability.  Like all SHOTOVER systems, the U1 has no ITAR restrictions, enabling it to be shipped around the world without requiring U.S. State Department approval.

To download the spec sheet for the SHOTOVER U1, please visit: http://shotover.com/site_assets/content/U1specs_10.22.V6.pdf

SHOTOVER is a developer of high performance aerial camera systems for the motion picture and broadcast industries.  The company's line of gyro-stabilized camera platforms offer aerial cinematographers an unprecedented level of stability, control and versatility in a compact package easily configured for 2D, 3D and Ultra HD shooting with the world's most advanced cameras and lenses.  Developed in partnership with the motion picture industry's top aerial cinematographers, SHOTOVER systems are fully user upgradeable, allowing operators to utilize new professional cameras, lenses and accessories as they come to market.  SHOTOVER is online at http://www.shotover.com.