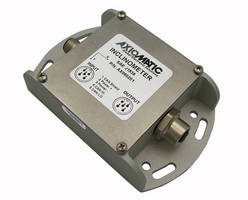 Providing output via CAN bus, RS232 port, or as three 0-5 V signals, IP67 rated AX06025X series measures inclination angle in 2 orthogonal sensing directions in range up to Â±90Âº, or in one direction Â±180Âº when installed vertically. Series also supports SAE J1939 CAN interface (AX0602XX), which is configurable using Axiomatic Electronic AssistantÂ® programming tool. All units are packaged with M12x2 5-pin connectors or M12 x1 5-pin. Mating plug with CAN termination resistor is available.


Mississauga, ON, Canada - Axiomatic's family of rugged inclinometers and tilt sensors has a series of new low cost sensors that can measure ±90º degrees or 360 degrees angular rotation. The AX06025X series features CANopen networking, a RS-232 port or 3 Voltage Outputs for communicating the angular measurement. The inclinometer series also supports the SAE J1939 CAN interface under the p/n's AX0602XX. The J1939 inclinometer is fully configurable using the Axiomatic Electronic Assistant® programming tool for PCs. All units are packaged for an IP67 rating with M12x2 5-pin connectors or M12 x1 5-pin. A mating plug with CAN termination resistor is available.

The angles are measured by a two-axis MEMS sensor, which senses acceleration caused by the gravity force. The output signals from the MEMS sensor are normalized and processed by a microcontroller to receive inclination angles. The resolved angles can be then sent to the CAN bus, RS232 port or output as 3 0-5V signals.

Due to a powerful microcontroller, the inclinometer can perform pre-processing of the angular information according to the users' needs. Its internal architecture is user-programmable and allows users to define their own custom functionality using a set of predefined internal functional blocks. For J1939 models, application programming is performed through the CAN interface by the PC-based Axiomatic Electronic Assistant® software. For CANopen® models, application programming is achieved via standard and commercially-available tools for CANopen®.

In a tilt sensor application, an out-of-range state can be transmitted as one of its outputs.

Applications:
Inclinometer - An integral part of a position control system or subsystem for construction equipment (excavators) and after-market excavator attachments.
Tilt Sensor - Provides out of level indication for lift equipment and other machines.