Smallest and most efficient stormwater runoff process available in the marketplace

(West Chester, OH, January, 2006) - CONTECH Construction Products Inc. has developed the Optimizer(TM), an innovative new underground detention technology system and solution engineered to stabilize and manage stormwater runoff. This Optimizer technology is the smallest and most efficient stormwater runoff method or system in the marketplace.

The Optimizer process lowers project installation costs due to less excavation and backfill necessary on the smaller-sized solution, which speeds up installation. Less pipe is also installed in this smaller footprint solution, which is ideal for tight sights where larger, traditional systems will not work.

Optimizer Process
Current systems collect and temporarily store excess runoff, while discharging the water at rates not exceeding predevelopment levels. The new Optimizer technology is based on a series of flow control tank processes to allow the system to instantaneously discharge at the maximum allowable rate. A pressure build-up process inside system surge tanks allows for the quick discharging to occur.

A designer is now able to discharge to maximum allowable rates sooner with the Optimizer than with any other system. And, due to the small size of this new technology compared to conventional systems, it saves significant costs by actually decreasing the quantity of water that needs to be stored.

As underground detention systems are many times considered the best solutions, the Optimizer is also much safer than open ponds, which unnecessarily utilize land and usually incur high maintenance costs.

The Optimizer process reduces the size of standard detention systems by up to 50 percent over current technology, which are inefficient during the early stages of design storms.

Flow Enhancement
The new Optimizer technology fills surge tanks in the system with smaller volumes of water to build pressure heads, releasing the discharge quicker through multiple orifices. Plus, multiple sizing tanks within the system allow it to be set up independently to accommodate equally for all of the design storms that a designer must meet.

The series of flow control devices housed inside the Optimizer underground detention system meets all environmental and system regulations. The system is also more flexible in service as well as installation, as it can be covered by a parking lot or green-space area.

Hydraulic calculations in the Optimizer process are conducted in this PhD-developed solution, through the use of routine spreadsheet development and analysis.

About CONTECH
CONTECH is a leading civil engineering site solutions products and services company. Privately owned and headquartered in West Chester, Ohio, CONTECH is the only nationwide provider of corrugated metal and plastic pipe, detention/retention systems, geogrid and geotextile materials, erosion control products, concrete arch systems, retaining wall systems and bridge structures. Its product portfolio is based on more than a century of research and practical field experience serving the highway, drainage, sewage and site-improvement markets. More information on CONTECH is available at or telephone 800-338-1122. 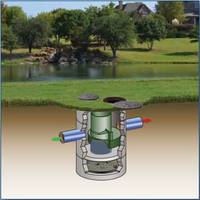