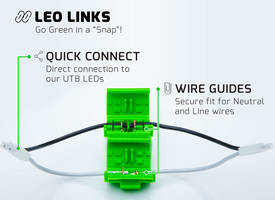 The lighting experts at ULUXUS (http://uluxus.com/) have taken to Kickstarter for the launch of their newest solution, the ULUXUS Link LED Retrofit System. The very first solid solution for T12 & T8 fixtures. The ULUXUS Link will work instantly regardless of any ballast type & condition. The campaign begins on May 1 and has a fundraising goal of $100,000.

Traditionally, converting from fluorescent lighting to LED involved a trade-off. "Plug-and-play" solutions are quick and easy to install, but need lots of maintenance and aren't as reliable as they should be. The more complex option is a ballast bypass rewire. This solution is more efficient and reliable, however, rewiring takes more time and can be dangerous if not done correctly.

"We saw a problem with LED retrofitting and set about solving it," says ULUXUS Founder Leo Kwok. "After much research and development, we're pleased to introduce ULUXUS Link. The very first solid solution for T12 & T8 fixtures. Our system will work instantly regardless of any ballast type and condition. In a matter of two steps, you'll have successfully converted from fluorescent to LED with 100% reliability and safety. We encourage everyone to visit out Kickstarter campaign and learn more about this breakthrough product."

ULUXUS Link offers a conversion process that combines the benefits of plug-and-play with those of full rewiring, yet has none of the associated drawbacks. The real breakthrough is the company's "Leo Links" hardware, which enables anyone to bypass the ballast wires without being an electrician or worrying about safety issues.

ULUXUS Link is comprised of two parts — Leo Links and UT8 LED tubes. As mentioned, the installation process requires no rewiring, and the hardware is 100% compatible with all unmodified fixtures as well as single-end, double-end and non-pin modified fixtures. The first step of the process is attaching the Leo Links to the neutral and line power wires that feed to the ballast. The Leo Links are snapped closed with a set of pliers. Next, the LED harness connects to the Leo Links and then the UT8 LEDs. At that point, the lights are ready to be powered on. And, if necessary, the whole process can be instantly reversed to switch back to fluorescent lighting.

Superior performance and industrial-grade reliability are the hallmarks of the UT8 LED, making it a natural choice for the ULUXUS Link system. Each tube produces up to 2,100 lumens at 150 lumens/watt. Plus, UT8 LEDs have three built-in brightness presets.

ULUXUS will be attending Lightfair International in Philadelphia on May 7 - 11. Prospective buyers can receive invites to see the new ULUXUS Link hardware in action. Interested parties can contact Leo Kwok at leokwok@uluxus.com to details on how to receive an invitation.

Orders of the ULUXUS Link placed during the Kickstarter campaign will ship out immediately in June. More details about the campaign, such as perks and ordering options, will become available at launch on May 1.

ULUXUS has been in the lighting industry for over 5 years starting in Hong Kong as an R&D specialty house for energy efficiency products. ULUXUS launched its first North American branded, unique, A19 LED product in 2015 after having the product obtained the Energy Star and UL certifications. That is also when ULUXUS LLC formally registered as a California corporation. The founder of ULUXUS, Mr. Leo Kwok, is a seasoned Silicon Valley engineer and entrepreneur devoting his team's effort to energy conservation product innovation and development, after extensive working experience with large organizations such as IBM and Siemens.