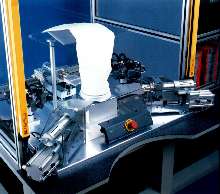 
RingMaster(TM) equipment was exhibited at Filtration 2002

How the System Works

Ultrasonic welding is achieved when vibrational energy is introduced, via a welding head, at the interface of the plastic part and the nonwoven filter media. This causes the materials to melt in a fraction of a second. When the material resolidifies, the result is a strong, high-quality bond. Sonobond's ultrasonic RingMaster(TM) Filter Bag system is designed with three welding heads spaced 120° apart around a center fixture. To begin the process, the operator manually loads the plastic ring and filter bag onto the fixture, then activates the optical touch start buttons. The three welding heads close on the part, weld, and retract, performing the first of two weld functions. In this first step, each head welds 1/6 of the circle. The center fixture then rotates 60° and the heads close in again, welding the remaining bag segments. The heads retract, allowing the operator to unload the finished bag. The two-step process, which results in a complete 360° weld between the bag and the plastic ring, is completed in less than ten seconds.

Ultrasonic bonding has distinct advantages over other assembly techniques, says Janet Devine, President of Sonobond Ultrasonics. "With ultrasonics, the need for consumables such as adhesives is eliminated. In addition, the production runs more
efficiently because there is no need to allow time for glues or other solvents to dry." Ultrasonics can also replace stitching as an assembly method, as evidenced by liquid filter manufacturer Krystil Klear Filtration of Winamac, Indiana. According to President Fred Geyer, the stitching method, which creates perforations in the plastic ring every 1/16-inch, may adversely affect the durability of the product. "The ultrasonic welder offers a better, stronger seal with no thread," says Geyer.

Custom-designed units and high quality components aid filter manufacturers Sonobond's RingMaster(TM) Filter Bag Machines can be customized to meet specific production requirements. According to Devine, Sonobond's engineers work with filter manufacturers to develop specialized units that will result in the most effective assembly method, including designing custom tooling to accommodate different bag sizes and ring diameters. In addition, Sonobond uses the highest quality machine components, including a Bosch enclosure with an opening for loading and unloading parts, and a built-in STI light curtain which shuts down the equipment if any object, such as a hand or arm, enters the welding area during operation. The RingMaster(TM) Filter Bag Machines also feature Banner Opto-Touch(TM) buttons, which allow the operator to barely touch the start buttons to activate the system. This limits the motion which could cause hand and/or wrist damage, such as carpal tunnel syndrome.

Sonobond Ultrasonics manufactures a complete line of ultrasonic welding and cutting equipment that is used with nonwovens to assemble a wide range of filters, as well as medical disposables. The units, which are available for both spot and continuous welding applications, cut and seal in one operation and can accommodate a number of thicknesses or layers.

Sonobond Ultrasonics, a member of the Inductotherm family of companies, is a worldwide leader in the application of ultrasonic bonding technology. In addition to plastics and nonwovens, Sonobond's products bond metals and textiles in a variety of industries, including automotive, HVAC, appliances, medical, electronic and electrical.
Share