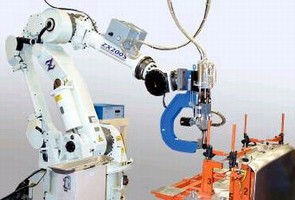 Available bench mounted or adapted for robot operation, WeldMaster(TM) C-Frame I has one ultrasonic head and opposing anvil, while WeldMaster(TM) C-Frame II has 2 ultrasonic heads, one that powers welding tip and one powers anvil. Units can be operated by robot arm, which positions welder at desired weld locations, while automotive parts to be joined are held stationary in fixture. Both are supplied with microprocessor-controlled 2,500 W power supply.


These powerful, new units were developed in an Advanced Technology Program with Ford Motor Company. They proved highly effective in welding large, aluminum parts for the automotive industry and are now available for use in a wide variety of other applications.

WEST CHESTER, Pennsylvania, November 13, 2007-Sonobond Ultrasonics announced today that its new C-frame metal spot welders are now available for applications outside the auto industry. The initial development of these welders was part of an Advanced Technology Program sponsored by Ford Motor Company and partly funded by a grant from the National Institute of Standards and Technology. This three-year program cost an estimated $8,910,000 and was designed to develop ultrasonic metal welding technology for use in the mass production of lower-weight, aluminum automobile bodies for better fuel economy.

Additional Applications
According to Sonobond president, Janet Devine, "We engineered the C-frame ultrasonic spot welders specifically for the Advanced Technology Program. These units showed that they could effectively accommodate the large sheet metal parts used in building aluminum automobile bodies. As a result of this success, Sonobond has added them to our trusted WeldMaster(TM) line of ultrasonic metal welders. These new C-frame spot welders, the WeldMaster(TM) C-Frame I and the WeldMaster(TM) C-Frame II, provide the same quality, reliability, and cost-effectiveness as our other welders. At the same time, they have exciting new features and benefits that manufacturers of other ultrasonic metal welders do not offer. This again demonstrates Sonobond's ongoing leadership in the field of ultrasonic welding technology."

Operated by Robot Arm
In developing the C-frame ultrasonic metal welders, Sonobond has created units that permit more travel between the tip and anvil and have a deeper throat. The welders can also be operated by a robot arm. The robot arm positions the welder at the desired weld locations, while the automotive parts to be joined are held stationary in a fixture.

In talking about the development process, Devine says, "The first of the two C-frame welders we produced, the WeldMaster(TM) C-Frame I, has one ultrasonic head and an opposing anvil. Using the robotic arm enabled Ford Motor Company to evaluate thousands of welds. They found that the tips can perform up to 200,000 welds without experiencing serious degradation."

Creating a Second, Larger Welder
Sonobond then built a second, bigger C-frame to accommodate even larger automotive parts. This second model, the WeldMaster(TM) C-Frame II, has two ultrasonic heads. One head powers the welding tip, while the other head powers the anvil. Ultrasonic vibration is introduced from both sides of the weldment. This reduces the weld energy and weld time required in making a weld to about half that needed for a single head. It also dramatically reduces the tendency towards tip sticking of aluminum parts, as well as deformation of the part welded. Devine says, "To the best of our knowledge, Sonobond is the only manufacturer of ultrasonic metal welders that has found a way to virtually eliminate the problem of tip sticking. We are very excited about the potential of these two C-frame spot welders. We strongly encourage plant managers, production engineers, and others to contact us for more information about the viability of the WeldMaster(TM) C-Frame I and the WeldMaster(TM) C-Frame II for their specific applications."

Each of the new spot welders is supplied with Sonobond's microprocessor-controlled 2500 watt power supply. The units can be bench mounted or adapted for robot operation.

Ultrasonic Welding
In ultrasonic welding, high frequency ultrasonic energy is directed via a welding tip to the surfaces of the metals to be welded. The energy disperses the oxides and surface films between the work pieces to create a true metallurgical bond without melting the materials. Ultrasonic welding is environmentally friendly, produces no waste, and is economical to use.

A Leader in Ultrasonic Welding Technology
Sonobond is a worldwide leader in the application of ultrasonic welding and bonding technology. In 1960 Sonobond, then known as Aeroprojects, received the first patent ever awarded for ultrasonic metal welding. During the intervening 47 years, Sonobond has earned an outstanding reputation for its pioneering work and quality-engineered products. Today Sonobond manufactures a complete line of ultrasonic bonding and welding equipment for a wide variety of customers in the automotive, appliance, electrical, HVAC, aerospace, filtration, medical, and apparel industries.

Additional Information
Additional information about Sonobond's products and its free, no-obligation Ultrasonic Welding Viability Test is available by visiting the company's website at www.sonobondultrasonic.com or by calling 800-323-1269.
Share