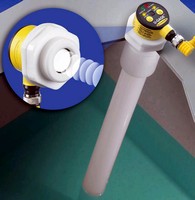 September 13, 2005 - Banner Engineering announces the addition of chemically resistant models to their U-GAGE® line of ultrasonic sensors. The chemical protection comes from a factory-installed Teflon® flange and film coating bonded over the sensors transducer, sealing against gases and vapors that would destroy standard models. Chemically resistant U-GAGE ultrasonic sensors are available in all QT50U and most T30U models and are ideal for a wide variety of level control applications in cleaning, etching and other chemical processes where material is corrosive or caustic.