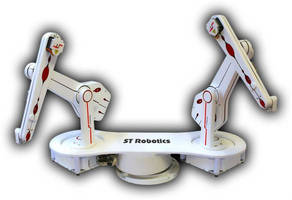 The impressive Tandem R125 is comprised of two 5-axis vertically articulated robot arms which are mounted to a programmable carousel.  The two robot controllers are interconnected, enabling communications to synchronize the motions of the two robots moving together; or allowing the robots to cooperatively alternate turns while performing one task.

Customer Francois Auden of Effinov in France agrees: "This product is just amazing!"

Including the programmable carousel, ST Robotics' Tandem R125 robot has a total of 11 axes.  The entire system is available for less than $20,000 and includes everything to get up and running: the two R12 five-axis robot arms mounted on the carousel, two K11R controllers, RoboForth II software, intuitive teach pad, simple interfacing with other equipment, cables, manuals, a two-year warranty and unlimited free technical support.

A video of the Tandem R125 robot system used in an industrial deburring application can be found at: www.youtube.com/watch?v=UXmYz2TOS6Q . Other models and variations of ST's Tandem Robots offer two six-axis R12s for a total of 13 axes with a maximum reach up to 1000 mm; an R19 cylindrical format; and linear tracks up to 3m.

ST Robotics, widely known for 'robotics within reach', has offices in Princeton, New Jersey and Cambridge, England. One of the first manufacturers of bench-top robot arms, ST Robotics has been providing affordable, easy-to-use, ready-to-go, boxed robots for nearly 30 years.  ST's robots are utilized the world over by companies and institutions such as Lockheed-Martin, Amazon, Motorola, Honeywell, MIT, NASA, Pfizer and Sony, to name a few. The numerous applications for ST's robots benefit the manufacturing, nuclear, pharmaceutical, laboratory and semiconductor industries.