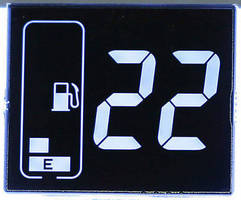 InfoVue EBTN technology is compatible with standard LCD drivers and is ideal for a wide range of applications including: