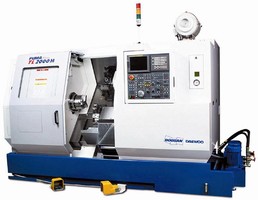 PUMA TL-series features upper and lower turrets and programmable tailstock for parts 9.4 in. dia x 23.6 in. long. While model TL2000 accepts 2.6 in. dia barstock, TL2500 accepts barstock of similar or 3.0 in. dia and 39.3 in. lengths. Both models are designed for interrupted cutting. Their dual turrets house 20 tools total, with live tooling at any station, and servo drives reduce station-to-station times to 0.10 sec. Centers also feature 945 ipm Z-axis rapid traverse.


West Caldwell, NJ - Daewoo's new PUMA TL-series of high-performance turning centers feature upper and lower turrets, and a programmable tailstock for parts 9.4" diam x 23.6" long or 2.6" diam. barstock on the model TL2000, or of similar diameter and 39.3" long or 3.0" diam. barstock on the TL2500. Both models are designed for heavy and interrupted cutting, high accuracy, and superior surface finishes. With twice the number of tools simultaneously in the cut, cycle times can be reduced by factors approaching 50%.

The spindle is driven by either a 30 Hp or 35 Hp (30 minute) integral motor, generating speeds of 5,000 rpm or 3,500 rpm respectively. The motor is surrounded by an oil jacket cooling system to ensure consistency and precision through the widest range of cutting conditions.

The Puma TL can also be specified as a twin turret, with a programmable tailstock replacing the second spindle. The tailstock has a travel of ???" along wide, wraparound, rectangular-type guide ways. An additional ???" is available through quill travel.

Both models are constructed on heavily ribbed, Meehanite castings to help dissipate heat and absorb vibrations. Their 45° slant bed design, a characteristic of Puma turning centers, allows easy access to the spindle and turrets, and improves the flow of chips and coolant. Torque tube construction, another Puma characteristic, eliminates torsional stresses associated with heavy cuts, and provides a through-the-casting conduit for cool air.

Standard features include an automatic tool setter to compute tool offsets without skim cuts, and a tool monitoring system. A belt-type oil skinner to remove tramp oil from the coolant, and electric torque limiter crash protection are also standards.
Share