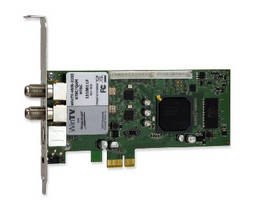 
The popular dual TV tuner board gets an update, with better digital TV over-the-air reception and a new FM radio receiver

HAUPPAUGE, N.Y., – Hauppauge Computer Works, Inc., the leading developer and manufacturer TV receivers for PCs, announced today the availability of the new WinTV-HVR-2255. This half height, PCI Express, TV tuner has dual NTSC/ATSC/QAM receivers built-in and is a performance enhancement to their popular dual tuner TV receiver, the WinTV-HVR-2250.

Hauppauge has released a new version of the WinTV v7 application for use with the WinTV-HVR-2255. It provides "watch one channel while recording another", plus offers "picture-in-picture" using both TV tuners. In addition, the WinTV-HVR-2255 can be used with Windows Media Center as a dual tuner, multi-format TV receiver.

The WinTV-HVR-2255 with the WinTV v7 application and a Windows Media Center remote control kit will have a list price of $129. The WinTV-HVR-2255 board only with drivers for Windows 8 and 8.1, Windows 7 and Windows XP will sell for $109.

Hauppauge Computer Works Inc. is the North American operating company of Hauppauge Digital Inc. Hauppauge is a leading developer and manufacturer of TV receivers for PCs, high definition video recorders plus digital TV and data broadcast receiver products for personal computers. Hauppauge Digital Inc. is headquartered in Hauppauge, New York, with administrative offices in New York, Germany, Singapore, Taiwan, Ireland and Luxembourg and sales offices in Germany, The Netherlands, Sweden, Italy, Spain, Singapore and California. The Company's Internet web site can be found at www.hauppauge.com. Hauppauge and WinTV are registered trademarks of Hauppauge Computer Works, Inc. Other product or service names herein are the trademarks of their respective owners.