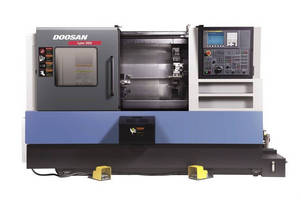 Lynx 300 features 10 in. dia, 3-jaw power chuck that turns 3 in. bar stock at speeds up to 3,500 rpm. Unit's bed is 1-piece Meehanite casting that absorbs vibration and dissipates heat. Linear motion guideways allow traverses of 945 ipm on X-axis and 1,181 ipm on Z-axis, and 12-station turret has 8.26 in. dia curvic coupling and 11,465 lb of hydraulic clamp force. Indexing repeatability is Â±0.0005Â° and turret indexing is non-stop and bi-directional, with 0.15 sec next-station index time.

Speed, Power, and Precision Meet in the Economical LYNX 300


West Caldwell, NJ - Today's turning centers can be economical without sacrificing power or precision. Demonstrating this is the Lynx 300, a new turning center from Doosan that's just now entering the United States.

The Lynx's 20 Hp, high torque motor provides the power for heavy cuts and the speed to produce near-mirror finishes. Its 10" diameter 3-jaw power chuck turns 3" bar stock at speeds up to 3,500 rpm, and its recommended price is well below others that do less and cost more.

The Lynx's bed is a one-piece Meehanite casting to absorb vibration and help dissipate heat, while its heavy ribbing resists twisting and distortion. A 30° slant bed maintains a minimal and constant distance between tool tip and guideway. This maximizes rigidity while eliminating distortion under heavy loads. The headstock is mounted on the same plane as the tailstock to assure perfect alignment and center height regardless of the bed temperature. Widely-spaced linear motion guideways allow high-speed rapid traverses - 945 IPM on the X-axis, and 1,181 on the Z.

Each axis is driven by a large diameter, high precision ball screw that is selected for its outstanding combination of accuracy, rapid traverse speeds, and high feed thrust. The ball screws are mounted directly to the A.C. servo motors. This design minimizes backlash for superior machining accuracy. Ball screws on each axis are protected in case of a crash by an electric torque limiter. Upon impact, the torque limiter senses the load and immediately reverses the servo motor and stops the axis movement.

Additional standard features of importance include a waylube separation system, a tool setter that eliminates skim cuts and manually entering tool offsets, automatic forced lubrication, coolant system with a 42 gal. coolant tank, and a part catcher. The controller is a Fanuc 0iTD.

Visitors to IMTS 2010 are invited to see the Lynx 300 in operation at Doosan's front-row booth number S-8100.
Share