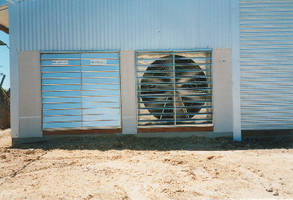 Featuring galvanized construction, Tunnel Vent Fans are placed into one end of shed and pull hot air through louver into outside atmosphere. Units include self-tensioning device, which eliminates need to physically tension bolts every 2 or 3 months. Instead of centrifugal clutch system, which is prone to jamming, fans use no-fail weigh-control operation, which provides spring-loaded opening from spinning impeller.


Air movement specialist Fanquip has released a new series of 'Tunnel Vent' fans that is ideal for the poultry industry and the general live-primary sector.

These fans are put into one end of a shed and they simply pull the hot air through a louvre and out into the outside atmosphere.

They have been introduced onto the market as a quality replacement for what are currently pervasive, well-known cheaper imports from Europe.

There is no need to physically tension bolts every two or three months because each Fanquip Tunnel Vent Fan has a self tensioning device.

Arguably the most unique characteristic of these units is that they do not use a clutch system to open louvres clutch systems are prone to jamming and often leave the entire system open.

Fanquip Tunnel Vent Fans use a 'no fail' weigh-control (gravity) operation rather than the more commonly used centrifugal clutch system, which has a spring-loaded opening from a spinning impeller.

Fanquip's version is a weighted louvre to help it close, while the moment any air goes through it the louvre opens. Therefore, there is no mechanical stress at all caused by this important and frequent action.

Made in North America, the Fanquip range is from a very mature poultry/primary market and is considered to be of much better quality.

This heavy duty line of fans has high efficiency characteristics. Its active process is itself recognised as 'tunnel ventilation', which is a more efficient and cleaner method compared to stirring fans and big openings in walls.