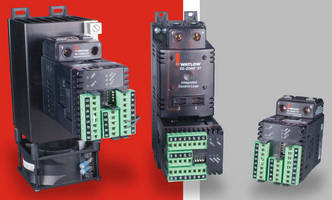 The EZ-ZONE ST meets all of these requirements.

This expanded offering improves thermal uniformity, temperature repeatability and provides the functionality of multiple components and footprints collapsed into one. The newer size takes up less overall surface area inside the panel than an equivalent solution assembled from discrete devices. The design of the EZ-ZONE ST provides a complete thermal system kit to reduce project and engineering design time and is already tested and validated for the specified ampacity.

The EZ-ZONE ST comes complete with a free internal communications bus (standard bus) which provides a single entry point for configuration and monitoring or location to access multiple controllers on the bus. For those applications requiring a display or remote user interface (RUI), the EZ-ZONE ST has the option of adding a 1/16 DIN RUI as a stand-along device or combining the RUI with gateway functionality. The gateway will access higher level field buses (PROFIBUS, Ethernet/IP(TM), DeviceNet(TM) or Modbus®) by converting standard bus to the field protocol once instead of outfitting each controller with an independent protocol card, and all at a much lower cost point.

About Watlow
Since the company's founding in 1922, Watlow has brought its thermal expertise to numerous applications, including semiconductor, photovoltaic, analytical, medical, clinical, plastics processing, foodservice equipment, packaging, aerospace and others. Headquartered in St. Louis, Missouri, Watlow is the largest custom designer and manufacturer of industrial heaters, sensors, controllers and software with offices and manufacturing facilities around the world.
Share