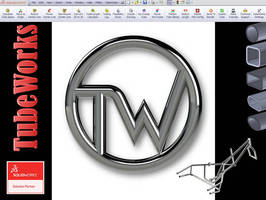 simplifies design/manufacture of parts with complex bends and cut-outs

Developed by the software consultancy 3DCompound, TubeWorks is a specialist add-in module for the popular SolidWorks mechanical CAD package. By combining powerful visualization capabilities with automatic code extraction and file generation, the software enables metal fabricators to substantially increase the productivity of their tube handling operations through optimal use of manufacturing data. The time that it takes to develop programs for CNC tube bending and laser tube cutting machines, for example, is typically reduced from hours to just minutes.

For tube bending, the software automatically extracts key manufacturing information such as bend angles and rotations from a native SolidWorks model or a common CAD file such as STEP, IGES or ParaSolid and creates the bend table for immediate use on a CNC bending machine, as well as the XYZ coordinates and a 2D drawing of the modeled tube.

Version 2.6 of TubeWorks extends this functionality significantly, by enabling users to ‘unbend’ the CAD models of bent tubes into flat (or straight) configurations containing full details of all holes and cut-outs, to provide the input data for laser tube cutting machines. Manually flattening a CAD model of a bent tube part requires specialist skills and is a notoriously time-consuming and potentially error-prone task. For example, flattening the model of a tube part that features five or six multi-plane bends and a couple of holes could take a designer several hours. In contrast, achieving this using TubeWorks merely involves a few mouse clicks and takes about 30 seconds.

As well as automating the extraction of manufacturing data, TubeWorks offers numerous functions to further help users minimize the pre-production design time of machine-based tube cutting and bending. These include automated centerline creation through tubular geometry (for both round and non-round profiles) and automated conversion of imported tube models into native SolidWorks models for CLR (centerline radius) modification.

Two new ‘Power’ functions are designed specifically to help users overcome a commonly encountered problem where SolidWorks does not recognize the tube face of an imported model as cylindrical, which makes centerline creation more time consuming. The Power Centerline function enables users to create a centerline sketch simply by clicking on appropriate features of the displayed model, while the Power Recreate function can be used to quickly reinstate model data from a centerline sketch.

The latest version of TubeWorks also now offers an automated Deduct Length function that enables users to shrink flattened tube configurations simply by specifying the required length change and the point at which it should be applied, to compensate for the elongation shown by their coordinate measuring machine (CMM). They can then immediately create a new YBC file for the bending machine and a new ParaSolid file for the laser tube cutting machine.

Alan Pickering, CEO of Unison, points out, “TubeWorks has proved very popular with tube manipulation companies for speeding their quotation and production procedures. The addition of laser tube cutting functionality means that the software will now appeal to an even wider customer base, especially if they are seeking to reduce design-to-manufacturing times by handling all tube bending and cutting operations in-house.”

TubeWorks is a fully integrated add-in for the SolidWorks CAD package and is available exclusively from Unison. It eliminates the need for any additional software to generate manufacturing data for the design, development and production of tubular metal parts, while providing completely unfettered access to SolidWorks’ powerful design functions.

A video demonstrating TubeWorks’ key features and ease of use can be viewed on Unison’s website at: http://unisonltd.com/products/software/tube-works/

Unison has one of the most extensive portfolios of tube bending technology in the industry. As well as an exceptionally wide range of bending machines, handling systems and automated work cells, the company offers productivity enhancing software tools covering every aspect of tubular metal fabrication – from design and manufacture through to final inspection. Proprietary products include Unison’s powerful PC-based Unibend Office and Opt2Sim 3D simulation software for offline creation, test and validation of bending programs, as well as a unique calculator app for evaluating bending machine tooling that runs on Apple’s iPhones, iPods and iPads.

Unison started in business by developing control systems for metalworking machinery – supplying a number of prominent machine manufacturers in the 1970s and 1980s. In 1991 the company moved into machinery design, focusing on machines for tube bending. At that time, tube bending machines were powered hydraulically. In the early 1990s Unison developed a range of machines employing electrical servo-motors for controlling bending motion. These were the world’s first 'all-electric' machines for tube bending. The performance of Unison's new machine design – with its fast and repeatable software-controlled set-up, right-first-time action, low power consumption, and quiet and clean operation – was an instant success.

The company has progressively led the tube bending machinery industry by increasing the tubing diameters that can be formed using all-electric motion and is now one of the world’s leading manufacturers of tube bending machines and associated software. In 2014, Unison took another quantum leap in tube bending machine power by developing a servomotor-powered machine architecture that is capable of bending thick-walled piping with diameters of 225 mm and more.

Any trademarks used including Solidworks and Parasolid, are the property of their respective owners, and are recognized by Unison.
Share