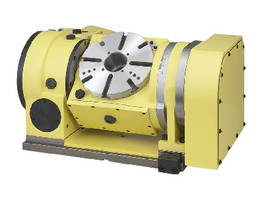 Mundelein, IL - (April 23, 2009) Lyndex-Nikken introduces the new 5AX-201 rotary table featuring a large 8" faceplate trunion work envelope that can be incorporated in smaller BT30 vertical machining centers such as the Fanuc Robodrill, Brother Drill and Tap and Kitamura Mycenter. It provides a workholding space traditionally associated with larger 40 taper machines, but with a compact body design that allows it to be used in conjunction with the speed and versatility BT30 machines have to offer.

Nikken's unique patented carbide worm system assures wear resistance, rigidity, and the rapid speeds of this rotary table. The carbide worm system uses a carbide worm screw and ion nitrided worm wheel rather than a conventional bronze or bronze alloy actuation mechanism. The result is a reduction in friction and wear by up to eight times. The worm screw consists of a less brittle V-grade form of carbide, while the worm gear is ion nitrided to a depth of 0.1mm and an external surface hardness of 68Rc. These properties, as well as a steel way hardened to 58-60 Rc, all work to enhance system rigidity and longevity.

Allowing for the machining of five sides of a workpiece, the 5AX-201 features a drop trunion and rotary/tilting axis clamping torque of respectively 434/452 ft./lbs. It offers secure gripping capability for unprecedented accuracy. Various options are available to meet workholding, fixturing and chucking requirements.