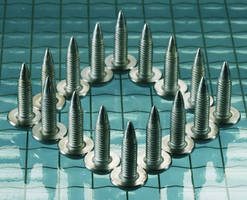 
Arnold Umformtechnik, a manufacturer of intelligent joining solutions and a development partner for the automotive and electrical industries, developed Flowform® screws in response to the increasingly complex requirements for sheet metal joining. These trilobal (triangular) screws utilise the technology of flow-hole forming in the fabrication process. Flowform is a cost optimised solution that offers higher process reliability for threaded fastener joints and considerable advantages over alternative sheet metal joining methods: ease of loosening, accessibility, positioning, reassembly with threaded fasteners, freedom from fabrication residues.

The market trend is to constantly reduce the thickness of sheet metal components while at the same time requiring their joints to be stronger. Particularly with regard to joining methods, there is a demand for cost-optimised high-tech solutions.

The screw heats the sheet metal by a combination of axial force and relatively high driver speed. After the screw penetrates the material, the trilobal shape causes a metric thread to be formed in the host material, which can accept a standard metric screw if repairs are necessary. After controlled-torque assembly, the formed hole adapts precisely to the shape of the screw. This assembly process eliminates the necessity for additional securing components, as well as the need for various component preparation steps such as drilling or punching. Fabrication options with or without prefabricated holes in the clamping plate are also possible. The decisive factor here is the thickness of the component to be clamped.

Compared with previously used standard self-tapping screws, Flowform® screws have considerably higher pullout and preload forces, as well as higher overtorque values. The special triangular cross-section of the fastener results in considerably better performance than conventional systems with a circular cross-section. Compared with them, the triangular Flowform® screws achieve a significantly larger delta between the thread-forming torque and the tightening torque (Figure 2).

This results in considerably higher process reliability for threaded fastener joints because drivers can be operated with a larger cut-off window. In addition, users benefit from a wider range of driver options and significant simplification of assembly process monitoring.

Flowform® screws also offer considerable advantages over alternative sheet metal joining methods, such as gluing, riveting, clinching or press-in components. The tremendous advantages of this new product are especially apparent with regard to the criteria of ease of loosening, accessibility, positioning, reassembly with threaded fasteners, freedom from fabrication residues, and the possibility of eliminating preparatory processing operations.