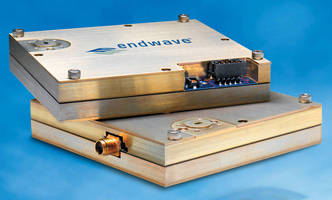 The typical performance of Endwave's TX module includes a conversion gain of 15 dB and an output power of 16 dBm, with an integrated power detector on the TX output. (Higher power transmitter options are also available.) Endwave's E-band RX module provides a noise figure of 9 dB, better than 25 dB of RF-to-IF conversion gain, and an input one dB compression point (P1dB) of -25 dBm. Separate models cover the 71-76 GHz and 81-86 GHz operating bands.

Both TX and RX modules use Endwave's MLMS(TM) sub-harmonic mixer topology that provides a single level of conversion direct from E-Band to IF. This mixer design provides functionality and performance that is not available in MMIC format today. This architecture also significantly reduces the cost of the local oscillator (LO) circuit chain relative to the costs of comparable fundamental mixer approaches.

These E-band TX/RX modules are the first ever to employ both of Endwave's newest proprietary technologies, MLMS(TM) and Epsilon(TM) Packaging, in a single RF subsystem. These innovations facilitate small size and low cost. With successful implementation on these E-Band products, the viability of these technologies in applications from low RF frequencies to over 100 GHz is proven.

Additional features of the pair include support of modulation formats ranging from on/off keying to 16 QAM modulation, a sub-harmonically pumped TX/RX architecture and an on-board micro-controller for software controlled compensation. Options include closed-loop AGC on TX output (up to 10 dB range) and customized VCO-based synthesizers to drive the up-conversion and down-conversion processes in the TX and RX, respectively.

The advantages of wireless E-band links versus wired fiber-optic solutions include substantially lower deployment costs, deployment speeds that are measured in days (rather than months, or even a year for fiber), and reduced regulatory and environmental approval burdens.

Endwave Corporation designs, manufactures and markets RF modules that enable the transmission, reception and processing of high-frequency signals. As one of the largest suppliers of microwave point-to-point radio subsystems, Endwave is experienced in integrated transmit and receive modules that function in the millimeter wave frequency range. Endwave has 42 issued patents covering its core technologies including semiconductor and proprietary circuit designs. Corporate headquarters are located in San Jose, CA, with other operations in Salem, NH; and Chiang Mai, Thailand.
Share