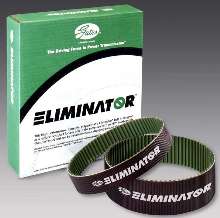 Gates new Eliminator(TM) belt is engineered to replace any RPP® tooth profile belt of the same width and comparable length, while providing double the service life of RPP belts.

Designed to run on existing RPP sprockets and idlers, and with the same tension as the original RPP belt, Gates Eliminator belt is interchangeable with competitive RPP belts, thereby saving transaction and inventory costs for users.

This reliable, extended service life means reduced downtime, because with Gates Eliminator belts, machinery will be shut down half as often for belt replacement service.