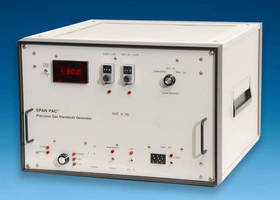 KIN-TEK's Span Pac(TM) H2O - SD (second dilution) uses a Trace Source(TM) Permeation Tube to add a precisely known, adjustable, trace concentration of water vapor into a flow of dry matrix gas to create calibration standards for trace moisture monitors. A second dilution stage then takes an adjustable aliquot of that primary mixture and further dilutes it with matrix gas to create substantially lower concentrations. This two-stage dilution method allows the output concentration of trace moisture to be varied seamlessly over a range of up to 10,000:1 from a single permeation tube. The system is designed to add water vapor concentrations in the range from 100ppb to over 5,000ppm.

An alternate function of the two-stage dilution system is to generate a variable moisture concentration while maintaining constant total flow. In this mode the concentration can still be varied over a range of up to 400:1.

The Standard Additions Technique is used to compensate for residual moisture in the matrix gas. In use, accuracy of the measuring device is achieved by calibration on the differential response due to the moisture addition. The moisture concentration added by the Span Pac(TM) H2O - SD is traceable to NIST through physical standards.