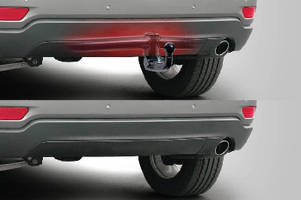 Mounted behind bumper, Bosal Tow Hitch has no visible attachment point that distracts from looks of vehicle. When vehicle owners want to use hitch for towing trailer or attaching bike rack, they snap in ball or square receiver. When towing is done, receiver is snapped out and hitch disappears. Spring-loaded design locks attachment in place and maintains rattle-free connection.

- First true hidden design hitch maintains OE look of vehicle - Bosal's new tow hitch program features a truly hidden design that maintains the vehicle's OE look. Ypsilanti, MI... The ACPS (Automotive Carriers and Protection Systems) Division of Bosal North America, Inc. has announced the introduction of their innovative tow hitch program for the North American vehicle market. The new Bosal hitch has a very unique design that allows the vehicle owner to remove it when it is not use. The hitch is mounted behind the bumper so the vehicle retains its OE look and does not have a visible attachment point that distracts from the looks of the vehicle. When vehicle owners want to use the hitch for towing a trailer or attaching a bike rack, they simply "snap in" a ball or square receiver and they are ready to go. When the towing is done, the receiver is snapped out and the hitch disappears. According to ACPS Sales Director, John Tiger, "There is nothing on the market quite like our new Bosal hitch. It's there when you need it and gone when you don't. This is just what our target audience of luxury and hi-end SUV, crossover and car owners want - a tow hitch that is available when you need it but does not stick out from the bumper all the time, get in the way, and distract from the vehicle's looks." The Bosal hitch is mounted behind the bumper and completely hidden from view. The ball hitch or square receiver easily attaches in seconds. They feature a spring-loaded design, which locks the attachment in place and maintains a sturdy, rattle-free connection. The design is extremely durable, fully tested, and warranted. In addition to the new tow hitch line, the Bosal ACPS Division also produces windstops for both OEM and aftermarket applications. The division was originally established as part of a joint venture between Bosal International N.V. and ORIS GmbH of Germany. Bosal is one of the world's leading manufacturers of complete exhaust systems for passenger cars, catalytic converters, tow bar systems, complete exhaust systems for trucks and industrial applications, roof bars and roof racks, wind deflectors, jacks and toolkits, cabins, irrigation equipment, precision steel tubing and warehouse racking systems. Established in 1923 by Mr. Karel Bos (1896) in Alkmaar, the Netherlands, the Dutch-registered privately owned group has 30 manufacturing plants including five R & D centers and 18 distribution sites with over 5600 employees around the world. In the US, Bosal backs up its wide product coverage with exceptional product availability and delivery from strategically located distribution centers in Budd Lake, NJ, Denver, CO, and Indianapolis, IN. Bosal offers same day shipping and can drop ship to anywhere in the US, with overnight service to most locations. Bosal is also supported by a state-of-the-art R&D facility in Michigan, as well as OE and aftermarket manufacturing plants in Michigan, Georgia, and Mexico. For more information or to become a Bosal distributor, contact: John Tiger, Sales Director, Bosal North America, ACPS Division, 1 Bosal Way Lavonia, GA 30553, 734/985-8239, jtiger@bosalusa.com