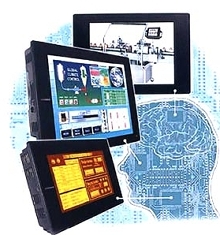 Everett, WA) - Maple Systems' announced the release of their newest line of touchscreen operator interface terminals this week. The HMI900 Series is a rugged line of high-performance graphic touchscreen operator interfaces that have been designed for industrial applications demanding extensive software features and advanced hardware options. They have been designed to meet the needs of OEMs and Systems Integrators whose applications require the very best from an OIT.

"No matter how harsh the environment, these HMIs are designed to withstand it," says Sam Schuy, Engineering Manager at Maple Systems. The HMI900 features durable, hard-cased enclosures that comply with NEMA 4/12 (IP65F) waterproof and dustproof standards, and the units are powered by 120-240 VAC. All have been tested to meet European CE EMC directives for electrical noise immunity and emissions, and they are rated for UL/cUL listing. Each model is designed for space efficiency, with less than two inches required for depth.

* The HMI985 features a 12.1" high-luminance TFT display and analog micromatrix touchscreen with 1900 touchpoints (28 lines x 50 columns). The CCFL backlit LCD display supports 256 colors in high resolution of 800 x 600 pixels. The HMI985 supports external audio output using WAV sound files and an interface that allows connection to an external SVGA monitor. It also has a built-in infrared sensor that automatically detects the presence of a plant floor operator, causing the screen saver to deactivate.

* The HMI960 has an 8.9", high-luminance EL display and analog micromatrix touchscreen with 1000 touchpoints (25 lines x 40 columns). The electroluminescent display supports 2 colors (yellow-orange and black) with sharp resolution of 640 x 400 pixels.

Each HMI900 also comes with 1 MB of Flash ROM that stores projects, a built-in PCMCIA slot for fast storage, a parallel printer interface that accepts Epson ESC and HP PCL compatible printers, and an RS232 port for connection to a bar code reader.

Along with the standard features, the HMI900 Series has powerful hardware options that give users the flexibility to configure their hardware exactly as they want:

"Designer-900 software is a powerful tool for programming the HMI900 Series," says Don Sayler, Software Engineer for Maple Systems. "It has two editing modes - extended and basic, which allow the programmer to use advanced features if necessary, or
to simplify the programming if they wish." Designer-900 comes with predefined libraries for displaying graphic objects like switches and lamp indicators. Bitmaps, DFX pictures, sound (WAV) files and text (CSV) tables can all be imported for more flexible design capabilities. Other features supported by Designer-900 include

* Alarm functions that display error information, history of occurrence times, comments and other information whenever an alarm condition occurs

* Reports that output to the display or printer

Switches can be configured to perform multiple actions, and data can be displayed on the panel based on a computed value from several PLC registers. Data can also be written to the PLC using a series of arithmetic expressions.

With the introduction of the HMI900 Series, Maple Systems now provides the most extensive line of human machine interface products available in today's marketplace:

The HMI500 Series features competitively priced touchscreen graphic operator interface terminals that are easy to program and use, with powerful graphics and animation features.

Maple Systems is a leading manufacturer of operator interface terminals for industrial automation. They focus on providing a complete range of operator interface solutions that now support over 100 families of PLC and motion control products manufactured by over forty of the top industrial automation manufacturers in the marketplace today. Based in Washington State, Maple Systems has been meeting the needs of the industrial marketplace since 1983.

The HMI900 products are available directly from Maple Systems. For more information about the HMI900s, or any of Maple Systems' other products, visit their web site at www.maple-systems.com or contact Maple Systems at 425.745.3229.
Share